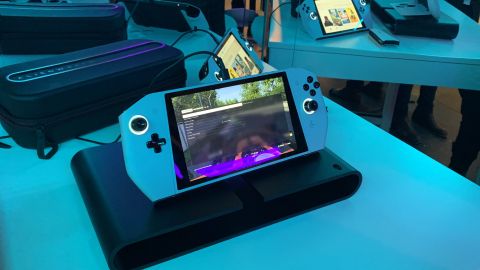 The Alienware Concept UFO may just be one of the most unique things in PC gaming, even if it is more than a little reminiscent of the Nintendo Switch. If this device actually comes out, it might just change the PC gaming market.

Anyone that's looked at the gaming space can tell you that the Nintendo Switch is a huge influence, so it shouldn't be too terribly surprising that Dell would want to jump in on the action. The Alienware Concept UFO is Dell's attempt to cash in on this new portable gaming trend, and we have to admit we're intrigued.

Essentially a gaming PC in a tiny form factor with removable controllers, the Project UFO is banking on the massive library of games that Windows 10 has to offer to stand out in the portable space. However, because it's heavy and will probably be extremely expensive, we're not quite sure who is going to be after this device. We do know one thing though: it's really freaking cool.

Because this is just a concept, we don't know when the Alienware Concept UFO will see the light of day (if it does, in fact, see the light of day), or how much it will cost. We honestly wouldn't be surprised if this device didn't launch until 2021. As for the price, because it's such a unique product that's packed with RGB lighting and sophisticated PC hardware, you should expect to pay a pretty penny for the Concept UFO – this isn't exactly a direct Nintendo Switch competitor.

Still, for anyone that loves the idea of the Nintendo Switch but wishes that it had a little more power and the massive library that the PC offers, the price may well be worth it.

One thing becomes abundantly clear the first time you pick up the Concept UFO. This is a hefty little piece of equipment. Dell hasn't released any specific information about its dimensions but if we had to guess, it weighs at least 2 pounds. That doesn't sound like a lot at first glance, but for a device that you'll be holding in-hand, it's big.

The Alienware Concept UFO isn't just heavy either – it's large, too. In fact it kind of looks like a modern version of the Sega Game Gear, only with removable controllers and a much larger screen. This isn't a device you're going to be able to carry around in your pockets unless you're still rocking Tripp pants.

The extra space and weight is justified, though. Because the Concept UFO is essentially a big PC in a tiny form factor, there has to be some pretty robust cooling within. Of course, Alienware wouldn't let us take the product apart while we were at their briefing event in New York, so we can only imagine what kind of thermal magic it's pulling here.

On each side of the device, you'll find the removable Joy-Con-esque controllers, but they're much more rigid than Nintendo's solution. This is likely mostly due to how much larger they are.

And, of course, because this is Alienware there is RGB lighting – another feature that the Nintendo Switch just doesn't offer. There are lighting elements around the joysticks on either of the controllers, along with the Alien Head logo on the back of the device. This is another thing we don't know the specifics of, but we're sure you'll be able to customize this lighting through something like the Alienware Control Center.

The controllers are removable, of course, which means there has to be a grip. We actually found that the Project UFO controller grip was far more comfortable in hand than the one included with the Nintendo Switch, as it's nicely angled and large enough to not be cramped.

This comes in handy when you're seated in one spot and want to play some games without fatiguing your wrists with the weight of the device. In fact, thanks to the rigid stand that pops out the back of the Project UFO, this might be the best way to play games on this device.

Alienware straight up wouldn't tell us anything about the hardware behind the Project UFO, likely because it doesn't yet exist. All we know is that it's running off of integrated Intel graphics. So, whether this is an Ice Lake chip or even a Tiger Lake chip with Intel Xe graphics, we just don't know.

What we do know is that the device gets the job done. The integrated display is a 720p panel from what we can tell, as each of the games we were given a chance to test out were running in that resolution. These games ran surprisingly well, too, even  Tom Clancy's The Division 2, which isn't exactly the most lightweight PC game on the market right now.

Now, don't get it twisted, this device won't be maxing out the latest games at 720p, either. Most of the games we got a chance to play were squarely on medium settings. And, while that might be disappointing coming from a desktop PC with an RTX 2080 Ti, it's honestly more than the Nintendo Switch can do at the same resolution.

This device is definitely exciting because it's basically a fully functioning PC. We know we're hoping it actually comes out because there's nothing we want more than to put it through our full gamut of benchmark tests in our labs. But at the end of the day, if we can play The Witcher 3 on the go without making it look as bad as it does on the Nintendo Switch, we'll call it a win.

The Alienware Concept UFO is definitely one of the most unique things we've seen out of CES 2020 so far, especially in the gaming scene. And, while we don't know when (or if) the device will come out or how much it will cost, we think it might be worth it for anyone that wants to get some serious PC gaming done on an airplane or something.

Only time will tell if it'll be able to run all the best PC games, but even if it doesn't it could be a way to carry around most of your Steam Library with you wherever you go.

There are other portable PCs that can play some PC games, but this would mark the first that's custom built for PC gaming. That alone makes it a device worth paying attention to, whether or not it ever takes off the ground. We only hope that this pushes other gaming manufacturers to do the same.