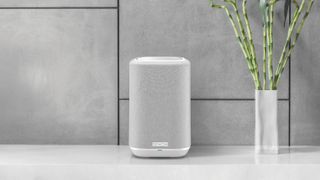 The Sonos One is our pick for the best wireless speaker of 2019 – but three striking new models from Denon could just shake up the audio scene, and unseat Sonos from its position at the top.

Composed of the Home 150, Home 250, and Home 350, the audio company's new wireless lineup builds on the success of the multi-room HEOS platform, melding minimalistic design with Denon's 110 years of audio expertise.

The smallest speaker in the range, the Home 150 will set you back $249 / £219 and looks most similar to the Sonos One. That works out at around AU$420 based on current conversion rates, but Australian prices are still to be confirmed.

All the streaming platforms

Coming in black and white finishes, these stylish speakers sport wraparound fabric grilles that will look great in any home – that grille is water and stain-resistant, so you can place the Denon Home speakers in your kitchen without a worry.

A buttonless panel features a proximity sensor, which causes the touch controls to illuminate when you move your hand close to the speaker, helping you to see exactly what you're doing in low-light conditions. Three (or six, if you opt for the Home 350) Quick Select buttons give you access to your favorite internet radio stations at a single push.

All three wireless speakers in the range come with a bevy of streaming options, including Spotify, Apple Music, Amazon Music HD, TuneIn, Deezer, as well as Bluetooth, Wi-Fi, and AirPlay 2 connectivity. Inputs include USB, Ethernet, and a 3.5mm AUX port for local connections.

Appealing to the audiophiles, Denon has furnished the new speakers with support for Hi-Res Audio files, including FLAC, WAV, and ALAC, which means you can listen to detailed, lossless versions of your favorite songs.

If you already have a HEOS-compatible speaker, AV receiver, or soundbar at home, you'll be able to group them together to play the same audio in multiple rooms of your home. It's also possible to set up stereo pairing, if you want to separate the left and right channels of a track for immersive listening.

There's support for voice control, too; you can control the Denon Home speakers with Alexa, Google Assistant, and Siri, through their respective compatible devices (so you'll need to talk to your Amazon Echo Dot if you want to control your Denon speaker with your voice).

However, all three Home speakers are set to become smart speakers too; according to Denon, they're getting native support for voice assistants in 2020, which is made possible by their built-in microphones.

So, how do the three new wireless speakers differ? It's mainly down to their size and the power of the audio kit inside.

The Denon Home 150, which is the cheapest of the three, comes with a one-inch tweets, a 3.5-inch woofer, and two Class D amplifiers. It's cylindrical shape echoes the likes of the Sonos One and the Apple HomePod.

Both the Home 250 and 350 look more like the Google Home Max, with large, rectangular builds.

The Home 250 sports a stereo configuration, with angled tweet blaring out the left and right channels of your music – these work alongside two 4-inch woofers, and a 5.25-inch passive bass radiator, to boost those low frequencies.

The biggest, and most impressive speaker of the lot is the Home 350, which packs two 0.75-inch tweets, two mid-range drivers, two 6.5-inch woofers, and no less than six Class D amplifiers – that's some serious sonic power.

Whether the Denon Home range will pose a true rival for Sonos remains to be seen – after all, the Home 150 is $70 / £40 more expensive than the Sonos One. Still, if it can deliver the fantastic sound, connectivity, and multi-room smarts Denon promises, then Denon could be the name on every audiophile's lips in 2020.