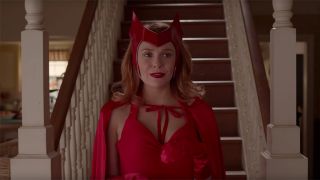 Fans of blockbuster films can always expect the Super Bowl to deliver the goods when it comes to 'Big Game' spots for the year's biggest upcoming tentpole films.

However, the rise of streaming services has seen more television shows jostle for some time in the spotlight, and Disney Plus has done just that by offering our first look at its upcoming slate of Marvel Studios television shows.

While the TV spot is only 30 seconds long, it does manage to cram in a fair bit for rabid fans to salivate over during its brief running time, including footage from Marvel Studios' highly anticipated TV shows The Falcon and the Winter Soldier, WandaVision, and Loki.

Unfortunately, the TV spot doesn't offer exact release dates for the shows, though a recent report by Deadline suggested that The Falcon and the Winter Soldier would arrive on Disney Plus sometime in August 2020.

Meanwhile, Marvel has confirmed that WandaVision has been moved up from its original 2021 slot in order to land this year. Fans of the mischievous Loki will sadly have to wait until next year for his show.

You can check out Disney Plus and Marvel's 'Big Game' TV spot below.