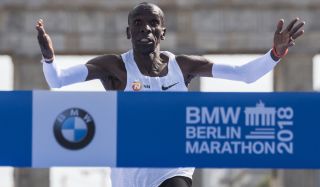 Fast, flat and synonmous with world records, the BMW Berlin Marathon is one of the six major marathons in the world and has been held annually since 1974. The course begins and ends near the city’s Brandenburg Gate and is part of a giant loop - and were here to tell you how to watch the Berlin Marathon 2019 online.

The 2019 BMW Berlin Marathon will be held on Sunday, September 29 throughout several boroughs in Berlin with the race starting and finishing near the city’s Brandenburg Gate.

The event will begin at 9am local time (8am BST, 3am ET, 12am PT, 5pm AEST) and the Berlin Marathon generally lasts about three hours with the top contestants finishing in just over two.

Will the men's marathon world record fall again at the Berlin Marathon? 2019 will mark the 46th running of the event but can it reach the high's of last year's race which saw Eliud Kipchoge smash the record with a time of 2:01:39 hours.

That shaved a minute and 18 seconds off Kenya’s Dennis Kimetto's benchmark time which was set in Berlin a mere four years earlier.

Prior to that the men's world record has been claimed in Berlin a further six times since 2003 during the 26.2 mile loop around Germany’s capital.

While Kipchoge won't be competing this year, fellow Ethiopian Guye Adola and Kenya's Kenenisa Bekele will be out to better his feat amid a strong field.

Meanwhile, three-time Berlin champion Gladys Cherono of Kenya, who last year bettered the course record by almost a minute when she won in a time of 2:18:11, is returning to try for a fourth victory, with Ethiopia's Mare Diababa likely to be her closet rival.

Watching sport with a VPN
Catching world-class athletics is pretty easy in certain countries like the UK and the US, but it hasn't always been so simple in other countries. Luckily, the growing popularity of VPNs have helped in that department. If you don't have easy access to watch the 2019 Berlin Marathon where you live, the best way to live stream is to download and install a VPN - that let's you alter your IP address to a country where it is streaming.

How to watch the 2019 Berlin Marathon: UK live stream

Unfortunately the 2019 Berlin Marathon will not be shown live on television in the UK. Don’t worry though as you can easily use a VPN to change your IP address to one elsewhere in the world (such as Canada) as described above. It's really easy to do and there are plenty of free trials and money back guarantees to take advantage of.

How to watch the 2019 Berlin Marathon: US live stream

If you live in the US and have a cable subscription, then you watch the 2019 BMW Berlin Marathon on the NBC Sports. The network’s coverage begins at 3am ET (midnight PT) with the race itself set to start 15 minutes later.

You can also stream the Berlin Marathon online if you have the NBC Sports Gold Track & Field pass which could very well be the case if you’re a big athletics fan.

How to watch the Berlin Marathon on NBC without cable

For those without cable, that NBC access is tough since your credentials will be asked for. Fear not as there are services that let you watch NBC without cable. It just so happens we have a handy few of the best right here for you to pick from.

How to watch the 2019 Berlin Marathon: Canada live stream

Canadian athletics fans are in luck as the 2019 BMW Berlin Marathon will be broadcast live on CBC Sports. The network’s coverage of the event will begin at 2:30am ET on Sunday and you can also watch CBC on your mobile devices with its apps for Android and iOS.

How to watch the 2019 BMW Berlin Marathon: Australia live stream

Australian TV won’t be showing the 2019 BMW Berlin Marathon but you can still watch all the action at Sunday’s event on specialist Flotrack service. You will need to sign up for the service’s Pro membership to watch the event with pricing starting at either $19.99 (A$26) per month or $149.99 (A$209.76).

Just like in the UK, you could also use a VPN to access CBC’s coverage of the event.