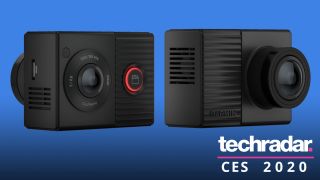 Garmin has unveiled a new dash cam at CES 2020 that uses a pair of wide-angle lenses to capture 360-degree video, recording what's happening all around your car, even when you're not actually driving, and at night.

Dash cams have come a long way in a fairly short space of time. Thanks to technology that allows you to capture better-quality video in a smaller package there’s been an explosion of the things available to buy, as our dash cam guide showcases to great effect. So, for a relatively small outlay, anyone can now get video monitoring on the go, which is great, especially if you're in the unfortunate position of having an accident.

In fact, dash cams are useful for a variety of reasons. The reassurance of having some crucial video evidence should you have a fender bender being perhaps the main part of their appeal, but they’re also mighty handy for keeping an eye out for thieves who might want to steal your car, or something inside it. They're even pretty useful for capturing the odd classic clip for posterity – or showcasing on the internet.

But dash cams have had their limitations, mainly due to a limited field of vision or their less-than-brilliant after-dark shooting capabilities. Now, though, Garmin has come up with a neat variation on the theme that incorporates all of the everyday features and functionality you normally get, but cranks video capture right up to the max. This is like the all-seeing video eye you’ve been craving as it shoots video of your car both inside and out.

The new Garmin Dash Cam Tandem really is a first for the accessories manufacturer, in that it offers drivers complete video coverage of their surroundings. While other dash cams have limited viewing angles, which can often be to their detriment, the Garmin Dash Cam Tandem tackles that shortcoming with aplomb.

As the name suggests, what you get with this particular package is a pair of ultra-wide-angle 180-degree lenses back to back, for a combined 360-degree field of view.

This dynamic duo provide you with a high-definition 1440p front-facing view of proceedings, which is further optimized thanks to Garmin’s Clarity HDR for optimal quality recording. Meanwhile, the interior lens adds in night vision and also incorporates Garmin’s nifty NightGlo technology. That gets you video of driver and passenger interactions, even after day has turned to night.

This is a really practical development in that Garmin’s NightGlo tech captures very high-quality night vision activities, including the facial details of passengers in the rear of the car. That’s a big deal give the surprisingly frequent and rather alarming amount of incidents that happen inside vehicles, including mini cabs and suchlike. Users can control everything from the Garmin Drive app too, which lets you view fully synchronized recordings that have been captured both inside and outside of the vehicle.

If two cameras aren't enough, Garmin also has its Dash Cam Auto Sync, which lets owners control no less than four dash cams in one go. This has the potential to provide you with multiple video capture viewpoints, such as a rear window vantage point or for covering blind spots that might normally provide thieves with the opportunity of pinching a handbag or something similar undetected.

Another bonus with the conveniently compact Dash Cam Tandem is the way that it does everything for you, with minimal input. Once plugged into your car’s power source the camera starts recording. Better still it'll keep the camera rolling even if you're not in the vehicle anymore, which means that it also doubles up as a parking surveillance tool. The icing on the cake is perhaps the way the front and interior-facing cameras can detect motion when the car is parked up and turned off, capturing video without the need for any owner input.

If, on the other hand, you do want to interact with the Dash Cam Tandem then it’s got a raft of voice control options. These allow you to save videos, still images and also stop recording as and when you wish, and all safely of course, thanks to the hands-free operating capability. There’s also built-in GPS that provides owners with the exact location details of their vehicle, which could be critical in the event of an incident occurring.

Rounding it all out very nicely is the built-in automatic incident detection sensor that ensures you get recording on both sides of an event or incident. Garmin also pointed out during its launch at CES that the dash cam can operate in hot environments up to 80-degrees centigrade, which is a feature unlikely to be needed in most locations. That said, using it in Las Vegas during the summer could be another thing entirely.

“With rideshare services like Uber and Lyft on the rise as well as unforeseen altercations happening inside vehicles, it makes great sense for these drivers to depend on a high-quality dash camera that records not only what’s happening on the road, but also what’s going on inside their vehicles at all times.”

One other handy touch is the way the Dash Cam Tandem comes with a charger that boasts an extra USB port, just to you can be sure you're going to be connected during your journey. In addition, there’s a replaceable microSD card in the box, so owners can start recording from the word go. The Garmin Dash Cam Tandem comes with a price tag of $299.99/£299.99 (about AU$450), which seems pretty good value for the comprehensive levels of safety, security and piece of mind that it provides.