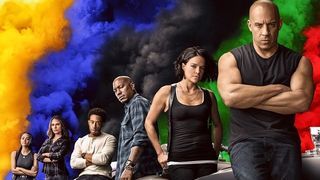 Update: The full trailer for Fast and Furious 9, officially called F9, is here, and it features a car swinging over a chasm, a car strapped to some rockets and lots of talk of "family", among a myriad of returning series characters. Check it out below. You can go see Fast 9 on May 22, 2020.

Original story: The full trailer for Fast 9 will be released this Friday, but in the meantime, a one-minute teaser is doing the rounds, featuring Vin Diesel and Michelle Rodriguez. Now parents to a son named Brian (of course), Dominic Toretto and Letty Ortiz appear to be in semi-retirement.

A larger threat is teased for this movie, which is apparently the penultimate mainline entry in the Fast and Furious series (which sounds incredibly unlikely in this age of the undying movie franchise).

Check out the Fast 9 teaser trailer below:

This is the first installment directed by Fast Five's Justin Lin since Fast and Furious 6. The full trailer is being revealed at a Miami concert event on Friday ahead of the Super Bowl, and all plot details have been kept under wraps in the meantime.

Still, you can probably expect the other two hours or so of the movie to contain more car chases than you see in the footage above. It's all a bit retired-Tony-Stark-in-Avengers: Endgame, isn't it? Hopefully a quaint family life will end better for Dom than it did for Tony.

This is a slightly quieter year for big blockbusters, with no Star Wars movie or Marvel movie on the scale of Avengers: Endgame, so you can probably expect Fast 9 to be the biggest of the year at the box office. 2017's Fast and Furious 7 grossed over $1.2 billion.

If you can't wait for the ninth movie and need more Fast and Furious in your life, Netflix released the animated kids' TV series Fast and Furious: Spy Racers back in December. Along with last year's Hobbs and Shaw, the Fast and Furious extended universe somehow seems like it's becoming a thing.