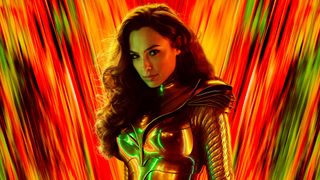 When is the Wonder Woman 1984 release date? If you're anything like us, having witnessed Diana Prince's epic sprint through the bleak, hellish emptiness of no man's land, you'll be desperate for more from the badass goddess of the Justice League. Wonder Woman became the highest-grossing superhero origin film of all time in 2017, and made Patty Jenkins - who returns for 1984 - the best-paid female director.

Wonder Woman refused to shy away from the horrors of the Great War, but at the same time blessed a generation of girls with a role model that proved that they could be a hero just as much as men. While Wonder Woman 1984 appears to be adopting a lighter tone, it's shaping up to be just as excellent.

We'll be going over the film's release date, trailer, and cast - with some spoilers from the previous film - so you're all set for a return to the bright neon lights of the eighties.

The Wonder Woman 1984 release date is June 5, 2020. While that isn't long to wait, we could've already enjoyed it on the big screen, if it wasn't for a hefty delay. The original launch window was November 2019, but producer Charles Roven explained to Collider that this led to a "very rushed post-production schedule.''

Super excited to announce that, thanks to the changing landscape, we are able to put Wonder Woman back to its rightful home. June 5, 2020. Be there or be square!!!✨🙅‍♀️✨ pic.twitter.com/Wj8ORUQLdgOctober 22, 2018

Perhaps Warner Bros was also concerned about the galaxy-consuming hype around the finale of the Star Wars trilogy of trilogies, The Rise of Skywalker. Either way, it appears that Wonder Woman 1984 can only benefit from some additional time.

If you're of an enviable age or just not up on your synth-pop, you may be wondering just what is that Wonder Woman 1984 trailer song? That eighties earworm is New Order's Blue Monday and we love how the pounding beat syncs with gunshots in the trailer. Speaking of music, the legendary Hans Zimmer returns here for his sixth DC film.

A brief #WonderWoman1984 clip was shown at #SDCC, with Wonder Woman whipping out the lasso of truth in a shopping mall; very bright and fun. @PattyJenkins explains why she set the film in the 80s, below. pic.twitter.com/uQKDeRvyJhJuly 21, 2018

The Wonder Woman 1984 trailer gives us a good glimpse at the film's eighties setting, a time important to the director. Speaking at San Diego Comic Con 2018, Jenkins explained that this decade "was mankind at its best and worst", making this backdrop fertile ground for Wonder Woman's struggle against evil.

Speaking of evil, we see in the trailer that Kristin Wiig appears as Barbara Minerva, aka Wonder Woman's arch enemy, Cheetah. The trailer opens with the pair sharing drinks as friends, but given their comics history, we doubt this'll last long.

Diana may have faced down the actual God of War in her previous outing, but now she has another villain to face: Maxwell Lord. Lord, in the character's cinematic debut, is a master of manipulating human desires: we see Pascal's face all over television screens in the trailer, so it'll be interesting to see how his powers manifest in 1984.

We also know the script writers are ex-president and CCO of DC, Geoff Johns, and David Callaham, known for 2015's Ant-Man adaptation. Callaham is also working on the upcoming Spider-Man: Into the Spider-Verse sequel.

Wonder Woman 1984 cast: how is Steve Trevor alive in this movie?

Right, how is Steve Trevor still alive? Not only did he heroically blow himself up in a plane packed with mustard gas canisters, but in the Wonder Woman 1984 trailer, Trevor hardly looks a day older than he did in the Great War. That's over 60 years before the setting of the sequel.

That said, in an interview with Vulture, Roven claimed that Jenkins doesn't see 1984 as a sequel at all. He said Jenkins "was just determined that this movie should be the next iteration of Wonder Woman but not a sequel". Since the films are not intended as "one continuous story" this may mean that the narratives of both films don't necessarily connect, but we're still hoping for answers on this front. We honestly don't know right now, even if you were to lash us to the Lasso of Truth.

Speaking of characters back from the dead, Robin Wright confirmed to Net-A-Porter that she would return as Antiope along with Connie Nielsen's Hippolyta, but in a flashback sequence.

After Shazam, Aquaman and Joker, it feels like DC's movies have found their form after the poor 2017 Justice League movie. Let's hope that doesn't change any time soon.