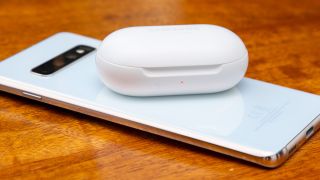 If rumors are to be believed, the Samsung Galaxy S20 is set to be one of the most impressive devices of the year, with incredible specs in the camera, hardware, battery and design departments. There’s one feature that hasn’t been mentioned, though, and it’s something I’m eager to see, because while it was present but flawed in the Galaxy S10, if Samsung can make it useful then the Galaxy S20 could be a true game-changer.

This feature is wireless power sharing (or ‘Bilateral Charging’ as some call it), which lets you turn your smartphone into its own wireless charging mat to power up other devices, like phones, certain wearables, or earbuds.

It’s a feature that we first saw in the Samsung Galaxy S10, and it also came in the Galaxy Note 10 and Huawei P30 Pro, but there's still a lot of work to be done before it’s truly useful.

On the Samsung Galaxy S10, the feature was disappointingly limited, so much so that you were generally best off ignoring it, as all the potential this feature brings was squandered with a few big issues.

If the Samsung Galaxy S20 wants to be a great phone in real life, and not just on paper (as it seems so far), it really needs to improve this feature – here’s why.

When I was at a concert with a few co-workers, one of them needed to charge their Samsung Galaxy Note 10, so I offered my fully-charged Samsung Galaxy S10 5G with its reverse wireless charging to give the Note a boost.

That turned out to be a bad idea. From roughly 15% charge, the Galaxy Note informed us it would take almost four hours to charge fully – we let it run for around 30 minutes, in which time the S10 5G lost around 20% charge while the Note only gained 2%, both handsets got really warm, and the phones were out of action for the whole time.

We had to hold the phones together at the same time (there’s nowhere to put a phone down at a concert, after all), and you need to hold them at the perfect angle to make sure the Qi chargers in the device align.

It’s possible we didn’t hold them in precisely the right way at times, since the devices are both so slippery that it took conscious effort to line them up just right. Still, a feature meant to be used by consumers should ideally be easy to use, and charging speeds were painfully slow even when we were sure the phones were aligned.

In the end, the co-worker decided it would be easier to just turn off their phone and not use it for the remainder of the concert.

Not only was the power inefficiency threatening to take the Galaxy S10 5G out of action while failing to save the Note 10, but it was just annoying having to hold the two phones together in exactly the right way to let the Note 10 charge.

Of course, this example is very anecdotal, and different people's experiences with the feature may vary, but I'd be very surprised if many people had truly positive experiences with Bilateral Chargng.

In theory, wireless power share is a really useful feature – in the previous example, it would have been an addition that changed my co-worker’s experience with the phone, had it worked. However in its current state, being inefficient and slow, it’s not really worth using.

If Samsung were to find a way to improve the feature in the Galaxy S20, it would make the device a genuinely great way to charge other phones, the Samsung Galaxy Buds, and anything else that powers up wirelessly.

Since we’re expecting the Galaxy S20 to come with improved wireless charging, it’s also possible it could come with better reverse power sharing too, with a higher wattage to let it power things up much quicker.

That wouldn’t solve the power inefficiency problem though, and that’s more important – generally, when something is power inefficient, most of the energy is lost as heat, and that speaks to the fact the phones in my example got pretty hot. In theory, it's possible the phones could get damaged if they got too hot (although it's probable the company has failsafes to protect against that).

Samsung needs to find a way to ensure wireless power charging in the Galaxy S20 series isn’t as inefficient as it was in the S10 devices, both to keep it a useful option for phone users and to protect the handset as much as possible.

One other way of reducing battery drain in the Galaxy S20 while using power sharing is to bump up the battery on the device, and according to the latest leaks (as of writing) all the S20 devices will have power backs with at least 4,000mAh capacity, so it looks like Samsung is going in this direction anyway.

The Samsung Galaxy S20 looks set to have a slew of impressive features – well, at least on paper, as the rumored specs sheet looks like nothing we’ve seen before. However a phone isn’t just a list of specs but a tool we use every day, and if those specs don’t translate into useful features, they may as well not exist in the first place.

Hopefully, then, the Galaxy S20 can pack reverse wireless power sharing that’s actually useful, so it can fix one of the Galaxy S10’s biggest problems.