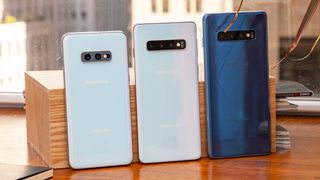 The Samsung Galaxy S10 Lite is one of the strangest phones stories of 2019, as we weren't expecting the company to release a second budget version of the Galaxy S10, but rumors suggest otherwise. Another surprise is its camera specs, as the device is rumored to have a feature no other Samsung phone does – a macro lens.

This is according to WinFuture, which claims it got its hand on a specs list for the upcoming Galaxy S10 Lite. Lots of the specs line up with what we've already heard about the device, but the idea of a macro lens in the phone is new.

A macro lens is used for taking close-up pictures of objects without having issues with focus or quality. A scarce few phones have them currently, like the Honor 20 and Xiaomi Mi Note 10, and it's a lens that most devices ignore in favor of, say, telephoto (which apparently isn't present in the Galaxy S10 Lite).

Yep, the Galaxy S10 Lite apparently won't have a zoom lens, despite that being a really common feature in smartphones. Some budget handsets do drop the feature in favor of ultra-wide and/or depth sensors, and that seems to be the case here.

The camera setup will apparently include a 48MP main camera, a 12MP ultra-wide snapper and this 5MP macro one. We'd previously heard of the 5MP camera, but it was said to be a depth sensor for more accurate background blur in pictures – don't count that idea out just yet though, as we don't know where WinFuture got its information, so it could be wrong.

The screen is apparently a large 6.7-inch Super AMOLED display, which is impressively large and high-quality for what's meant to be a 'Lite' phone. Saying that, even the Galaxy A mid-rangers have impressive screens for their price, and large, quality screens is one of the most popular features of Samsung phones.

The leak states the battery is a 4,500mAh one, which matches the Galaxy S10 5G as the biggest battery in a Galaxy S phone.

Finally, there's apparently 8GB of RAM and 128GB of storage space in the phone, which is again surprisingly high-end for a budget phone, all of which points to the Samsung Galaxy S10 Lite being less of an affordable budget device and more of a decent mid-ranger.

The supposed price matches that, as the leak puts it at €669 (around $740/£565/AU$1,090), backing up a previous rumor which listed the same price. That's a lot less than the Galaxy S10 launched for, and even more affordable than most Galaxy S10 deals reduce it to, although the Samsung Galaxy S10e has seen lower prices.

So when will we officially hear about this new Samsung phone? WinFuture expects it to launch 'in a few days' (from December 20), which is surprisingly close to Christmas. We'll find out if this is accurate... well, in a few days, whether or not the phone launches.