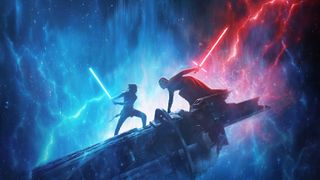 With The Rise of Skywalker just a month away, more details about Episode IX in the Star Wars saga are starting to emerge.

EW has a big cover story that doesn't give much away in terms of real plot details, but does talk a lot about character journeys in the film. Director JJ Abrams also insists that despite introducing new characters to the saga, this film does not set up any future films or trilogies, with C3PO actor Anthony Daniels saying, "It’s a very good ending, and a good ending feels right".

EW also showed off some new images of the film. Take a look:

A new look at #TheRiseOfSkywalker has arrived! 😯 For our December cover, we go inside the making of the final Skywalker Saga film. Click the link in our bio to see 8 exclusive new photos. 📷: Jonathan Olley/© 2019 Lucasfilm Ltd. Entertainment Weekly

Helmet-free Kylo Ren! For our December issue, we spoke to #TheRiseOfSkywalker star Adam Driver about the Rey-Kylo relationship and his character's destiny. Click the link in our bio to read our full cover story. 📷: © 2019 Lucasfilm Ltd. Entertainment Weekly

Both Oscar Isaac and John Boyega say they had their character wishes granted for the final Skywalker Saga film. Isaac wanted Poe to get “out the cockpit and into the group,” while Boyega wanted Finn to become a more capable solider. “[#TheRiseOfSkywalker] makes Finn’s 'Episode VIII' arc make more sense. We got to bring out a side of Finn we haven’t seen,” Boyega teases. Click the link in our bio for more scoop and exclusive photos from the upcoming #StarWars film. 📷: Jonathan Olley/© 2019 Lucasfilm Ltd. Entertainment Weekly

Abrams discussed his lessons from The Force Awakens, describing this as a grander film:

"But the ambition of this movie is far greater than Force Awakens. What we set out to do was far more challenging. Everything is exponentially larger on this."

John Boyega talks about how his Finn character gets to be a more "capable" soldier in this film, while Oscar Isaac's Poe Dameron spends more time out of a spaceship cockpit, interacting with the rest of the group. There's not loads we haven't heard before in terms of information (Abrams is notoriously secretive about his projects), but even hearing about this granular stuff heightens excitement in the film.

Abrams, meanwhile, discusses the return to the Death Star teased by the trailers as "going into the haunted house".

"This is a story of people having to grapple with the burden the prior generation dumps on those that follow," Abrams tells EW. "So literally returning to this wreck of the past and having to fight it out felt like an obvious metaphor, but also felt incredibly cinematic."

The truth about Rey's parents (again)

It's previously been discussed by JJ Abrams that there was more to say on Rey's parentage in Episode 9 – they were written off as junk trader drunks in The Last Jedi, which was a more interesting approach than claiming she was related to Obi-Wan or Greedo or something – but here Daisy Ridley addresses it directly.

"The parents thing is not satisfied – for her and for the audience," Ridley told EW. "That's something she's still trying to figure out – where does she come from?"

Somehow, it's been four years since The Force Awakens, and we're still talking about who Rey's parents are. There are some pretty wild fan theories out there about where that's going, given what we know about some of the pieces on the table in this film, but we'll let you hunt those down in case we repeat them here and they turn out to be true.

Star Wars: The Rise of Skywalker is released on December 19.