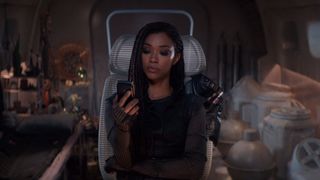 Energize! Star Trek: Discovery season 3 has been confirmed. A third series was made official not long after the complex, timey-wimey exploits of Captain Pike’s crew in the previous galaxy-hopping adventure, but plenty more problems await in the distant future.

Discovery returns in 2020, but it’s a separate release to Star Trek: Picard. Creator and co-showrunner (alongside newly-promoted showrunner, Michelle Paradise) Alex Kurtzman told The Hollywood Reporter that, "the intention is to have something Star Trek on the air all the time, but not necessarily on top of each other."

Now that Star Trek: Discovery season 3 is officially incoming, we're here to break down when we can expect the USS Discovery to land once again, who the new and returning cast members are, plus what story beats we can pick up from the first trailer.

Naturally, ff you haven't seen season 2 yet on CBS All Access in the US or Netflix internationally, make sure you you rectify that before diving into this spoiler-filled guide.

Star Trek: Discovery season 3 release date: coming in 2020, but when?

930 years from home. Their fight begins. #StarTrekDiscovery returns with a new season in 2020. #StarTrekNYCC pic.twitter.com/gaRLZbWCp7October 5, 2019

Season 3 was confirmed on January 18, 2019, the month the second season began. We’re still waiting for a specific release date, though. Season 1 premiered in September 2017, and season 2 arrived in January 2019. With that 16-month gap in mind and a 2020 release confirmed by Kurtzman above, the very earliest season 3 could release is in April, since Picard is releasing weekly until the end of March and it seems unlikely they'd debut new episodes at the same time.

Kurtzman told Deadline’s Crew Call podcast in June 2019 that "we are on episode five of season three of Discovery. We're far along."

The Star Trek: Discovery season 3 trailer reveals the future of the universe

Above we can see the state of the Discovery in the future. We also get a sneak peek of David Ajala (Nightflyers) as new character Cleveland Booker. As reported by Variety at San Diego Comic-Con 2019, Kurtzman said Booker or ‘Book’ "is going to be a character that breaks the rules a little bit."

Interestingly, we also see a United Federation of Planets Flag with only six stars - is the Federation no more in this time period? Could they be the 'ghosts' Book refers to in the trailer?

It also looks like Burnham is spending a long time in her search to find "that domino that tipped over and started all of this." Early in the trailer we see Burnham change her hair and appearance, suggesting that her adventures may take months, or even years.

Plenty of the Star Trek: Discovery season 3 cast are confirmed

The first trailer confirms the reappearance of a number of returning actors. They are:

It might be worth forgetting Captain Pike and Spock, as they languish in the present. "Our bridge crew is so capable," Kurtzman told The Hollywood Reporter. "We're going to be using all of them much, much more. Especially because this crew has forfeited their lives for each other."

So, how far did the Discovery go? Also at SDCC 2019, Kurtzman said: "Obviously we made a pretty radical jump into the future at the end of season two – we're going almost 1000 years into the future in season three, which is crazy. Further than any Trek series has ever gone before." 930 years to the as-yet-unexplored 32nd century, to be specific.

Kurtzman also mentioned at the panel that he’s excited by the prospect of getting to "honor canon but shake it up hugely." For Sonequa Martin-Green, speaking to Syfy Wire, this is an opportunity for the show to boldly go where no one has gone before, properly. Visiting new planets, timelines, and sectors is "the perfect way to define us, because we are new yet familiar."

Speaking of Burnham, we know that it’ll have an impact on her. Martin-Green said to TrekMovie that "there has been deep deep deep change [...] it’s linked to this very future we’re in. Basically, there’s a host of problems that this new future presents, an entirely brand-new tapestry of conflict."

Can Discovery bounce back?

The first season of Star Trek: Discovery proved a promising start to The Original Series, but it rather lost its way in season 2. Viewers waded through reams of exposition and technical jargon, and it mostly failed to capitalize on the engrossing, galaxy-consuming war of season 1. Hopefully this new Frontier will be the fresh start the series needs, without having to lean on familiar characters.