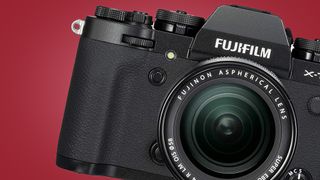 Update 28/1/20: We've updated this feature to include new rumors about the X-T4's launch date and speculation about its possible new battery. Read on for the full rumors round-up and our analysis of what we can expect from the X-T3's possible successor.

The Fujifilm X-T4, which is strongly rumored to be launching soon, would succeed one of our favorite mirrorless cameras, the X-T3. That camera mixes great image quality, classic styling and the finest range of APS-C lenses around. But it seems there is now enough room for improvement for Fujifilm to launch a successor.

If this is indeed the case, the X-T4 is set to arrive a little sooner than expected, given that the X-T3 is well under 18 months old. But it looks likely that the X-T4 (or whatever it's ultimately called) will combine modern features like a new EVF with the in-body image stabilization seen on the Fujifilm X-H1, which launched almost exactly two years ago.

So what other improvements can we expect from a Fujifilm X-T4, and when will you be able to buy one? We've rounded up all the latest rumors, and added a strong dash of analysis, to help you decide whether it could soon be time to upgrade to, or switch to, Fujifilm's new flagship APS-C mirrorless camera.

The usually reliable Fuji Rumors is pretty confident that the Fujifilm X-T4 will be shipping from March, with an announcement likely on February 26.

While this seems a little early for a successor to the Fujifilm X-T3 – which is well under 18 months old, and usually follows a two-year upgrade cycle – the rumors smoke is billowing enough to suggest this could be the case.

On January 9 the Japanese site Nokishita spotted that two new Fujifilm cameras had been registered for certification with China's MIIT regulator, with a third registered with the USA's FCC regulator. This normally happens just before a product announcement, and Fuji Rumors has since deciphered the product codes to be the Fujifilm X-T4, X100V and X-T200. This means the X-T4 is likely to follow a few weeks after the X100V's expected announcement on February 4.

Right now, there aren't any price leaks for the X-T4, but we can make some ballpark guesses based on its previous releases.

Fujifilm X-T4: will it have in-body image stabilization (IBIS)?

So far, there haven't been any detailed leaks of the Fujifilm X-T4's specs, but Fuji Rumors is confident about one thing – the X-T4 will have in-body image stabilization (IBIS).

The inclusion of IBIS would be a big new inclusion for both stills and video. It'd support improved handheld shooting in both low light and with lenses that don't have built-in stabilization themselves (on Fujifilm lenses, these are the ones without OIS in their name).

It'd also be significant because, so far, only one Fujifilm camera has included IBIS – the Fujifilm X-H1. If the IBIS rumors are to be believed, the X-T4 could in some ways be a spiritual successor to the X-H1 as much as the X-T3, given that camera was announced in February 2018, almost exactly two years before the X-T4's rumored launch date.

Fujifilm X-Series cameras have traditionally lacked IBIS because their main sell has been the 'big sensor-small body' combo for stills photographers, and adding stabilization usually means a larger body. But with video becoming a much greater focus on the X-T line in recent models, and Fujifilm's engineers apparently working away to make their IBIS system smaller, it certainly seems like a plausible inclusion on the X-T4 that would help differentiate from the smaller, travel-friendly X-T30.

Update 16/1/20: we've updated the battery section to include some apparent new information from Fuji Rumors.

While IBIS is the biggest rumored feature for the X-T4, there have also been a few whispers about other new inclusions – including the possibility of a brand new Fujifilm battery for the first time since the X-Pro1 arrived in 2012.

First, the rumors around video and design. Back in November 2019, FujiAddict in suggested the X-T4 would be able to shoot 6K/60p video and 10-bit internally, and have a fully-articulating flipscreen along the lines of the Panasonic S1H.

The site also mentioned that the body might be 8.5mm thicker and around 150g heavier than the X-T3, with a size increase certainly likely if the rumors about IBIS are correct.

A couple of other rumors to file in the 'speculation' category, posted by Fuji Rumors on 13 January, include a "best-in-class EVF" and improved battery life. The former could well be the 5.76-million dot EVF seen on the likes of the Panasonic S1, which would be quite a jump from the X-T3's 3.69-million dot 'finder.

But Fuji Rumors has since expanded on the battery rumor, claiming that it's confident the X-T4 will bring a brand new battery. This is a big deal because Fujifilm has used the NP-W126S (or variations on it) in every X-T and X-Pro camera so far.

It's struggled to significantly improve the battery life in those cameras, and with rivals like the Sony A6600 stretching their life to an impressive 720 shots thanks to the new Z-battery, Fujifilm may have decided it's time to act. It's a decision that always divides opinion though – the battery life benefits could be offset by the inconvenience to existing Fuji owners who have the existing batteries, unless the X-T4 is also compatible with the NP-W126S.

It's looking increasingly likely that Fujifilm will announce a successor to the X-T3 in February, alongside a new X100V and X-T200 – the question is exactly what form this camera will take.

The rumored timing of the announcement, almost exactly two years since the arrival X-H1, lends credence to the rumors around the X-T4 being an IBIS-equipped follow-up that model, as much as an X-T3 successor. This means it's possible it may not even be called the X-T4, though that name is the most likely frontrunner for the camera right now.

Based on the rumors so far, the X-T4 is shaping up to be the flagship all-rounder you'd expect, with a strong focus on video that could make it a potential rival to Panasonic's GH5 and S1H. We just hope it also fixes a few of our gripes about the X-T3, like the grip size when using longer lenses and the lack of a lockable exposure compensation dial. It certainly seems increasingly likely that the X-T4 will bring a brand new battery, which would be a welcome addition.

Given it's less than 18 months old, the X-T3 could even remain on sale as a smaller, more affordable alternative to the X-T4, but we'll have to wait until February to find out. Until then, we'll be updating this page with more rumors as get them, and will bring you the official news as soon as it breaks.