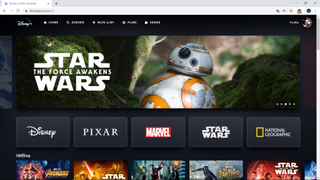 If you're keen to secure your subscription to Disney Plus you'll be pleased to know that preorders for the new streaming platform have now opened on the Disney Plus website for most regions.

Disney made the announcement during the Emmys, which saw streaming giants Netflix and Amazon Prime Video taking home awards for their original shows.

Curious as to how much the streaming service will cost you? Check out our Disney Plus price guide.

However, there's still no word on how much the new streaming platform will cost in the UK, or whether it will also launch in November in this region – if you're in the UK you can't preorder Disney Plus yet, but you can register for updates at the website.

The announcement came after a night of Emmys success for streaming platforms, which saw Netflix's Bandersnatch – an interactive episode in the Black Mirror anthology – win the Outstanding Television Movie award.

Meanwhile, Amazon's The Marvelous Mrs. Maisel won two awards in the supporting actor and actress categories, according to Engadget.

Disney Plus will no doubt be hoping to emulate that success at next year's Emmy Awards, with major shows like Star Wars: The Mandalorian and the Loki TV show set to come to our screens with the new platform

There will also be plenty of heritage Disney shows and films, as well as 21st Century Fox franchises like The Simpsons, which will see every episode in its 30-year history come to the  service.