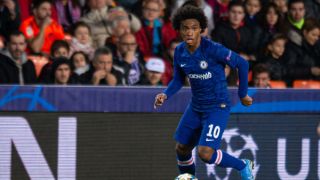 Chelsea's recent Premier League form has been shaky, but they can put that to one aside at Stamford Bridge tonight as Frank Lampard's side go into this game knowing that a win against Lille will put them through to the knockout stages of the 2019-20 Champions League. Keep reading to find out how you can grab a Chelsea vs Lille live stream, no matter where you are in the world.

Chelsea vs Lille live stream - where and when

That makes it a 3pm ET, 12pm PT kick-off in the US. For those looking to tune in from Down Under, its a 7am AEDT start.

With Lille out of the reckoning for the next round and playing just for pride, it would come as something of a surprise should Chelsea not get the win their fans will be expecting.

Despite the dead rubber nature of the tie for the French team, they're still expected to play their strongest side, with Victor Osimhen set to lead the line up front.

The only expected changes to the Chelsea line up is the return of Fikayo Tomori and Emerson at the back who both missed out on the Blues 3-1 defeat to Everton on Saturday.

To discover out how to watch what looks set to be an intriguing encounter keep reading and we'll explain all you need to know to grab a Chelsea vs Lille live stream.

Scroll down to find out your football viewing options for tonight's match in some of the major Champions League watching countries around the world. And if you're out of the country and are worried that you won't catch the game, don't sweat. With the option of using a VPN service, you can tune into this fixtures no matter where you are in the world. And best of all, it's really easy to do.

A VPN allows you to change your IP address so you appear to be in a completely different location. We've tested hundreds of VPNs and can recommend ExpressVPN as the best VPN service currently available.

How to stream Chelsea vs Lille live in the UK

Subscription channel BT Sport again has exclusive rights to show the Champions League in the UK, and will be showing every single match of the 2019/20 competition on one of its TV or online channels. Tonight's game will be shown on the BT Sports 2 channel with coverage starting at 7pm GMT.

If you're looking to stream tonight's match, the BT Sport app or BTSport.com is where you need to go, enabling mobile, tablet and PC viewing.

How to live stream Chelsea vs Lille in the US

Following TNT's acquisition of the Champions League and Europa League football rights, it will be showing more than 340 matches across the two competitions this season, including tonight's clash in west London.

You can stream the match via Turner's B/R Live  service online, through its app or on the likes of Apple TV, Roku and Amazon Fire TV. It costs $2.99 for a one-time only sub, $9.99 per month or - by far the best value - $79.99 for a whole year and meaning you'll get to see every remaining game of the tournament live.

For the 2019/20 season, live Champions League matches are broadcast in Canada by the ever-growing sports subscription service, DAZN. The channel will be live streaming every single game of the competition, including Chelsea vs Lille.

How to live stream Chelsea vs Lille in Australia

If you're outside Australia and want to tune in to Optus Sport , you can use one of our favorite VPNs above and watch the coverage from another nation. This match kicks off at 7am AEDT on Wednesday morning.

How to watch Chelsea vs Lille in New Zealand

The official broadcaster for the Champions League in New Zealand is Sky Sports. The network will be broadcasting over 100 live games for the 2019/20 competition, including tonight's match, which will be shown Sky Sport 7 with kick off at 8am NZST.

The channel to head to for tonight's game at Stamford Bridge is Sony Ten 1, with the game set to kick off at 1.30am New Delhi time in the early hours of Wednesday morning.