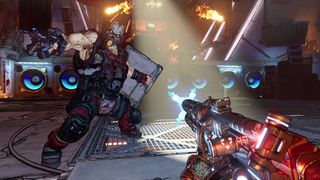 If you needed more evidence that 8K gaming on a PC isn’t a realistic proposition given current graphics technology, well, here it is in the form of Borderlands 3 being benchmarked running at 8K – and proving even more demanding than Gears 5 was last week.

Yes, this is another round of benchmarking from TweakTown designed to make any graphics card in existence sweat buckets, including the mighty Nvidia Titan RTX, which comes bristling with 24GB of GDDR6 of video RAM – but was once again brought to its knees by the demands of 8K gaming.

For these tests, Borderlands 3 was run under DX11, with anti-aliasing, camera motion blur, object motion blur and FidelityFX Sharpening all turned off (this was a demanding enough benchmark without adding these visual bells and whistles). And of course the game was set to 8K or 7,680 x 4,320 resolution.

Technically, at around 25 FPS a PC game is kind of playable, just about, although really anything under 30 FPS isn’t a great experience. And of course the problem with this being an average frame-rate is that you will often get considerable dips, meaning when there’s a lot of action or explosions – typically in critical or difficult combat situations – you’ll be faced with a slideshow of frames (with probably the last one witnessing you dead on the floor).

At any rate, once again, the broad conclusion is that 8K gaming isn’t truly feasible even if you can afford an absolute monster GPU (and of course the requisite 8K monitor).

That conclusion is heavily underlined by taking Borderlands 3 up to max settings (called ‘Badass’, which is a step above Ultra details, and three steps up from Medium). In this case, the Titan RTX doesn’t even get you a double-figure frame-rate, hitting an average of 9 FPS. Meaning it’s a constant slideshow…

Gears 5 on Ultra saw the Titan RTX record a result of 19.1 FPS, so in 8K resolution, it would seem Borderlands 3 is extremely demanding (or indeed arguably less well-optimized) in comparison.

How did a more mainstream (relatively speaking) Nvidia card do? The GeForce GTX 1080 Ti hit 17.7 FPS on Medium details, and actually managed 10 FPS on the Badass setting.

Yes, that’s better than the Titan RTX, and a rather odd result – plus the Titan Xp (a Pascal-based GPU like the GTX 1080 Ti) hit 10 FPS as well.

TweakTown double-checked this benchmark just to make sure there was nothing awry, and got the same result, so it appears that for whatever reason, the Turing architecture simply doesn’t perform as well as Pascal at the top detail level in Borderlands 3. Maybe there are optimization issues at play here somehow, although at any rate, the difference is only a single frame, so it’s not particularly worth worrying about.

How about AMD’s graphics cards? The Radeon VII managed 17 FPS at Medium, and 9 FPS at Badass, drawing level with the Titan RTX in the latter case.

AMD’s Radeon RX 5700 XT could actually manage to run Borderlands 3 at 8K, but at a predictably pathetically slow frame-rate of 5.7 FPS at Medium graphics, and 1.7 FPS with maximum details. Quite simply, its 8GB of video RAM isn’t enough to drive 8K gaming…

So 8K gaming is still a pipe dream for now, which definitely makes you wonder where all these claims about the next-gen consoles from Microsoft and Sony offering 8K resolutions are coming from, when top-end PCs can’t even reach 30 FPS with middling details and shiny bits turned off.