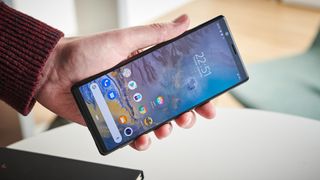 Most phone manufacturers have experimented with notches to allow for more screen space on smartphones in the past few years, and while Sony has held firm from adopting this or similar technology, it seems that may be set to change on future Sony phones.

According to a new patent filed by the company, and spotted by LetsGoDigital, it may be opting for a punch-hole camera or notch in the top center of the screen.

The new patent image is meant to show off part of the user interface of a device, but the images also show that the bezel along the top of the device isn't thick enough for a selfie camera.

Parts of the user interface are visible on the left and right at the top of the screen, which suggests it may be opting for a punch-hole camera at the top.

It may be the case that the patented image of the phone doesn't need that top bezel of the phone, as it's purely to show off the software, but there is a bezel along the bottom of the phone that's visible suggesting this is an accurate image of a design the company is working on.

Sony has adopted a 21:9 aspect ratio on its recent flagship phones, and moving the selfie camera into the screen would allow the company to extend the screen further without increasing the size of the device.

It's worth pointing out that, in the past, Sony has criticized front-facing cameras that get in the way of screen space like notches and punch-holes, implying they make watching content on a screen worse (as reported by T3), so it would be intriguing to see them backpedal on this notion now.

Rumors of a Sony Xperia 2 - or as it may instead be called the Sony Xperia 3 - are beginning to heat up and we're expecting to see the new device debut at MWC 2020.