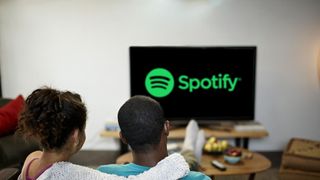 Just a handful of years ago, dramatized films about the rise of global tech giants were all the rage, with David Fincher's Facebook movie The Social Network and Danny Boyle's Apple-centric Steve Jobs biopic earning copious critical acclaim and awards recognition.

Now, Netflix is looking to bring 'big tech' to the small screen, with the streaming service green-lighting a limited series about the rise of music streaming juggernaut Spotify, as detailed by The Hollywood Reporter.

The Swedish and English-language series from Norwegian filmmaker Per-Olav Sorensen (Quicksand) will be based closely on the non-fiction book Spotify Untold by Sven Carlsson and Jonas Leijonhufvud. The book is said to chart the once small upstart company's involvement in the music streaming revolution at the height of online piracy.

"It's the story of how a small band of Swedish tech industry insiders transformed music — how we listen to it and how it’s made — it is truly a tale for our time,” said the untitled show's executive producer, Berna Levin (Young Wallander).

Levin continued, “Not only is this a story about the way all our lives have changed in the last decade, it’s about the battle for cultural and financial influence in a globalized, digitized world.”

Netflix's upcoming Spotify series isn't the only tech-related drama project that's currently in the works – a film about the fall of shared-workplace startup WeWork is also in development at Blumhouse Productions and Universal, while USA Network's Doom TV series will focus on the iconic game’s creation at id Software.