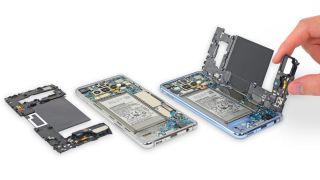 If you're thinking about picking up a shiny new Samsung Galaxy S11 this February, here's another factor to take into consideration – it might be harder to take apart and repair than its predecessors in the Galaxy S range.

As per a report in The Elec (via SamMobile), Samsung is apparently making the switch from double-sided adhesive to glue, giving the responsibility of sticking its phones together to Weldbond in China and HB Fuller in the US.

What that means is that the S11 handsets are likely to be harder to pull apart and get inside than the Galaxy S10 phones were – and so you might have your work cut out trying to get these devices repaired.

It's perhaps not as important as battery life or camera quality, but repairability is something else to consider when buying a smartphone, if only to make life easier for the staff at your local mobile repair shop.

We're now well used to the fine folks at iFixit breaking down computers, phones and many other gadgets to see how easy they are to assemble and disassemble, and the Galaxy S10 ended up with a rather low 3 out of 10 repairability score.

That might drop even further once the Galaxy S11 sees the light of day. The next family of flagship phones are expected to break cover at the MWC 2020 show at the end of February, or perhaps slightly earlier.

From Samsung's perspective, a switch to more glue means lower costs and the opportunity to make the bezels on its phones even thinner, so it makes sense when it comes to getting the handsets built.

On the other hand, tape is better from a waterproofing perspective, and is also easier to replace, should you have to take your phone apart for whatever reason. We'll have to wait until next year to see exactly what changes Samsung puts in place.