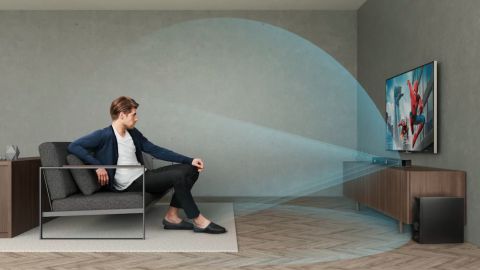 The compact Sony HT-ZF9 is the Penn and Teller of Dolby Atmos soundbars. It’s ability to create an expanded soundstage from just three drivers and a subwoofer is sonic magic.

There are no Dolby Atmos soundbars quite like the Sony HT-Z9F. Until now, Atmos soundbars have used front firing drivers with integrated Dolby enabling up-firers, to create immersive audio - examples of this include the pricey-but-versatile Samsung HW-K950 and the newly debuted LG SK10Y.

The HT-Z9F is different than either 'bar from Sony or Samsung, because it’s a 3.1 model that snubs physical up-firing drivers. Yet Sony says it offers a soundfield akin to a 5.1.2 system. Even in the world of amorphous Atmos hardware, it’s a bit of a head-scratcher. So just how does the HT-Z9F offer Dolby Atmos, you might reasonably ask? The answer is ‘virtually’. And it virtually works.

[Update: If you're thinking of buying the Sony HT-Z9F, why not wait for Black Friday on November 23? Everything you need to know about getting the best Black Friday and Cyber Monday soundbar deals can be found here.]

Design-wise, the Z9F is neat and simple. The bar is around a meter wide and features a removable grille, which conceals a trio of drivers.

The Bluetooth implementation is compatible with Sony’s LDAC extension, and while there's no NFC, Bluetooth headphones can  be paired for private listening. Chromecast is built-in, and there’s interaction with Google Assistant.

Keep in mind that the ZF9 is a 3.1 setup and thus the partnering wireless subwoofer has a forward facing 16cm paper driver.

The HT-Z9F comes with a full-function remote control, but also offers touch controls for power, input selection and volume. There’s also an IR repeater if you need one.

The HT-Z9F can also be upgraded with wireless rear speakers, Sony’s optional SA-Z9R, to create a physical 5.1 system. None were supplied with our review unit, so we’re focusing on the basic HT-Z9F proposition here.

Setup is straightforward. There’s no provision for auto calibration, although you can (and should) manually set listening distance for the soundbar and subwoofer. A clean Watch/Listen/Setup graphical interface provides onscreen orientation.

The good news is that the HT-Z9F really does deliver an expanded soundfield using post processing virtualization. This is sleight of hand for the ears.

Vertical S is given prominence on the remote control. This doesn’t switch the Vertical Sound Engine on or off, but toggles the up-mixer, and should only be used for two channel and non-object based sound mixes.

But like we say, the Vertical Sound Engine is actually really impressive. It demonstrably enlarges the soundstage, giving movie soundtracks width and height. What you don’t get though is any sense of overhead travel.

But the effect is unquestionably dramatic.

When Lois is knocked underwater by a shockwave in Batman V Superman Dawn of Justice, the soundstage genuinely appears to submerge. It muffles and sinks backwards, yet the fight between Bats and Supes above moves relentlessly forward.

Reassuringly, the compact subwoofer drops deep. It actually does most of the heavy-lifting, as the soundbar itself doesn’t offer anything much below 200Hz. Integration between the two is near seamless, which is very impressive.

The Dolby Atmos audio of Okja (Netflix), delivered va DD+, has layered depth. As the animal liberation front liberate the super pig in the confine of an underground tunnel, there’s a pervasive sense of echo and reverberation that extends beyond the front soundstage. An incongruous mariachi audio track sits back and wide from the action. The heavy footfalls of the escaping pig, as it thunders through the shopping mall, are given believable heft by the sub.

Selecting Dolby Virtualisation with the Vertical Height Engine turned off, the system offers a more pronounced sense of faux surround. The familiar Dolby Atmos Amaze trailer, with its circling bird, ripple of thunder and subsequent rain, is gloriously crisp, and offers a tantalising sense of surround that’s not there with the Vertical height Engine.

Choosing between the two is ultimately a matter of taste. However the Vertical Height Engine works better for a bigger audience, and unlike the Dolby processing, translates DTS:X.

The HT-Z9F isn’t just about movies. It’s compatible with High-Res FLAC 192kHz 24bit and DSD, and the result is more engaging than you might imagine. If you have low res audio sources, Sony offers DSEE HX plumping.

Against all odds, the 3.1 HT-Z9F really does offer an enhanced listening experience over vanilla-flavoured stereo soundbars. It has scale and width, and works well with movies and music. There are limits to its post processing science, though.

For example, ut doesn’t offer that characteristic Atmos overheard audio experience, and Dolby’s own Virtualiser often sounds better with Atmos-encoded material, albeit from within a much tighter and exclusive sweet spot.

Although priced a good deal lower than Dolby Atmos bars with integrated up-firing speakers, clever post processing creates an almost comparable listening experience. The HT-Z9F can slam with the best of them yet always manages to keep dialogue intelligible. It even does a nice job height-scaling music. The HT-Z9F should be a folly, but it’s actually pretty fab making it well worth an audition.