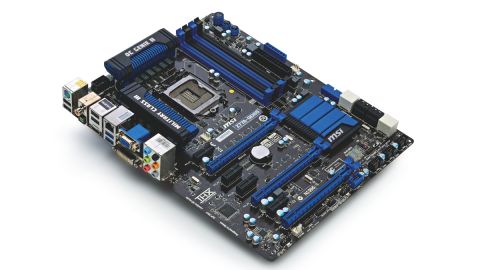 With the arrival of the Z77 chipset, we're hoping for a little uptick in raw platform performance.

In other words, it would be great if it was faster than the 6 Series chipsets for existing CPUs. Add in the performance benefit of the upcoming Ivy Bridge generation and you've got a promising overall package.

Unfortunately, we're not quite there yet with the Z77A-GD65 and not just because Ivy Bridge isn't quite out.

At default clocks and settings, it doesn't move the game on from Intel's previous generation chipsets. Whether it's memory bandwidth, rendering, encoding or gaming, the MSI is very much in the same ballpark as our reference H67 board.

That the Asus ROG Maximus V Gene is significantly pacier than the H67 in all the application benchmarks makes things a little tricky for MSI. Time will tell if the Maximus is a one off or whether MSI's Z77 is a little off the pace.

For now, it's pretty much on a par with the Asus Sabertooth Z77 for default metrics.

If that's a little disappointing, the MSI GD65 does keep us with the Maximus board when it comes to overclocking.

Both boards will hit an easy 4.8GHz on air cooling alone with our Intel Core i7 2600K test chip. That's around 200MHz higher than we're used to seeing with the same chip in an Intel Z68 motherboard.

Problem is, this time around it's the Sabertooth that delivers the goods, achieving a borderline bonkers 5GHz with a shonky air cooler.

The MSI doesn't exactly tear 'em up when it comes to one-touch overclocking. 4.2GHz courtesy of the OC Genie button isn't exactly shabby, but the competition is clearly quicker.

MSI doesn't skimp on quality and the Z77A-GD65 is veritably loaded with top notch caps, MOSFETs and other gubbins.

The cooling kit is nicely executed, too, and there are plenty overclocking features for both novices and experts.

The harsh truth is that the MSI GD65 didn't blow our socks off. At default settings, it doesn't move the game on from boards sporting Intel's 6 Series chipsets.

And while it does send some socks sailing when it comes to overclocking, Asus' Sabertooth Z77 puts on an ever better show.

MSI's first Z77 effort doesn't do a lot wrong, but it's not the best showcase of Intel's brand new chipset.