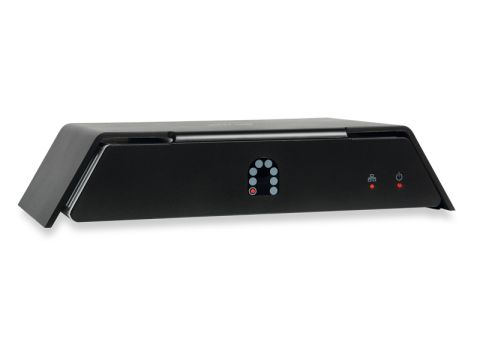 Aside from fiddly login issues and being too large to chuck into a suitcase, the Slingcatcher's main problem is the low-resolution playback, which needs improving if this is to become a long-term, multi-room video solution. But the Projector and Sync features turn it into an all-round media system as long as your PC is up to spec

With the exception of Sky+, the Slingbox is probably my favourite product of the decade, allowing me to watch my home TV from anywhere in the world.

All I need is a broadband connection and a laptop (and several phones are now Sling-friendly).

At home and away there is one drawback; you don't get the full 'lean back' entertainment experience with a laptop that you get with a TV.

The Slingcatcher answers this problem – and a few more we hadn't thought of – by connecting your TV directly to your Slingbox over any broadband connection.

It's a chunky device in the distinctive bevelled Sling shape and a standard AV gloss black, with the Sling logo and a couple of indicators for power and network connection.

It's a bit too large and heavy for my tastes, especially if you want to to throw it in a suitcase, and that's not including the external power adapter.

Part of this is the back panel which, as well as the Ethernet connector, has an HDMI, S-video, composite and component video and digital and analogue stereo audio. There are also two USB ports – one of these would be more useful on the front.

The remote's an odd-shaped triangular rod – it's like holding a Toblerone bar – which simulates your set-top's controls and can control your TV as well. Extra buttons allow you to adjust the screen aspect and a big Sling button accesses the 'Catcher's main menus.

Rather than pairing with a single Slingbox, the 'Catcher logs in through Sling Accounts, a new service that also enables PC users to log in to their Slingbox on a browser without installing the Slingplayer software. Sadly, it forgets your account details each time you change location, and we had big trouble logging into our Sling Account from overseas, but none at home.

The 'Catcher only connects via Ethernet, with no wireless support, so you'll need a well-cabled home or a powerline Ethernet connection like the Slinglink Turbo – and wired internet in a hotel room.

You can set the video output for anything from 480i to 1080p, but this only affects your menus, and the maximum resolution of your TV picture is an unimpressive 640 x 480, even if you're using the Slingbox HD.

In the best Sling tradition it presents a very smooth image, though it's noticeably lacking in detail compared with the PC Sling experience. There's the usual remote control lag, but you soon get used this.

Slingcatcher has two other useful features: Sling Projector and Sling Sync, both of which can be at greater resolution than a Slingplayer feed.

Projector is a 'screen scraper' – pulling the image (and sound) from your PC and relaying it to the 'Catcher. It means you can watch YouTube or iPlayer on your TV but it needs a very high-end PC to play from, preferably over a wired connection to your network. Our 1.6GHz Pentium with 3GB of RAM is above the minimum spec, but the video relay was jerky and ultimately unwatchable.

Sling Sync lets you watch video and audio from USB memory connected directly to the 'Catcher, and supports wide range of formats but, as yet, you can't watch iPlayer, iTunes or other DRM-protected downloads. However, playback quality from a stick or USB drive is very good.