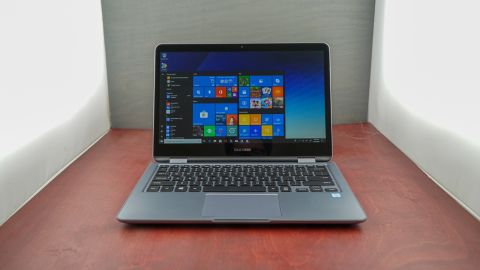 Samsung has drastically changed its Notebook 7 Spin year over year, crafting a 13.3-inch that’s sublime to use in some places and baffling in others – making for a laptop we’d be fine with using for a long time, but which isn’t exactly award-worthy.

The Samsung Notebook 7 Spin is one of the best 2-in-1 laptops we’ve used in a long time, but in 2018, the firm behind it decided to switch things up a bit. What was a 15.6-inch, value packed powerhouse of a hybrid laptop is now just 13.3 inches – and, while lacking power in the graphics department, is more sensible in size and scope.

The Samsung Notebook 7 Spin definitely isn’t perfect – in fact it cuts some corners in places where it shouldn’t have to given the price. Still, after using it for a while, we’d be fine if this were our daily driver, and that’s good enough praise for Samsung’s first laptop of 2018.

Here is the Samsung Notebook 7 Spin configuration sent to TechRadar for review:

The Samsung Notebook 7 Spin 2018 comes in at $899 (about £650, AU$1,140), and is only available in one configuration. This laptop is available either though Samsung directly or through Best Buy, and what you’re getting inside is exactly what you see to the right in the spec sheet.

This is a bit of a shame, but it’s not like other device manufacturers, even Apple, Google and Microsoft, aren’t pulling the same stunt.

The Notebook 7 Spin’s pricing positions it right between mid-range and flagship laptops. However, at $999 or £999, the Samsung Notebook 7 Spin still needs to bring a premium computing experience.

At the same time, the entry-level Google Pixelbook will set you back $999 (£999, about AU$1,500) for a similar hybrid experience that also lacks an included stylus. However, for the extra expenditure, you’re settling for a lower-power processor, but getting as much storage and memory behind a sharper touchscreen.

Then, there’s the more mainstream Lenovo Yoga 720, that manages to undercut the Samsung Notebook 7 Spin by 50 bucks in the US for pretty similar hardware – down to the same CPU, display resolution, storage and RAM. The model we tested, though, still has last year’s Intel CPU inside.

Samsung made this laptop thin and light enough to fit in a backpack with little notice, but it won’t be winning any awards in either category, and it doesn’t seem to have ever intended to. This is a basic hybrid laptop for both performance and pleasure.

And, it’s even a far cry from last year’s model in terms of style. For instance, the Samsung Notebook 7 Spin measures just 13.3 inches diagonally, rather than 15.6 inches. Secondly, its frame is comprised of a much darker, anodized gray aluminum and two sturdy hinges, rather than the single-hinge design and silver aluminum shell of last year.

However, the Notebook 7 Spin being 18.5mm thick only invites more questions as to why a stylus wasn’t embedded into the product, when far thinner Samsung laptops have already accomplished this.

That said, we’re pretty much in love with Samsung’s keyboards these days, and that love only grows with the Notebook 7 Spin. Keys are spaced well and evenly backlit, the caps are curved for ease of use, travel is deep enough at 1.5mm and feedback is plenty punchy. We’ve experienced little to no learning curve in using this keyboard, so users of Apple keyboards should feel right at home here.

The touchpad is just as delightful to use, which comes as no surprise given that it’s a Microsoft Precision Touchpad underneath a glass coating. That said, there is a bit of keyboard flex that happens when pressing the touchpad to click – not a great look for a premium device.

Samsung is definitely a master of displays at this point, and the one on the Notebook 7 Spin is definitely no exception. However, there isn’t exactly anything to write home about regarding the screen.

It produces a fine 1080p resolution and ace color reproduction, making movies a joy to watch on the 13.3-inch PLS panel. (PLS stands for Plane to Line Switching, Samsung’s proprietary means of competing with IPS for wide viewing angles, but we see little difference.) The display responds quickly and accurately to touch, too, leaving nary but a trail behind our fingers as they trace along the display.

Oh, and the screen wobbles a little – but never changes position – under our touch. That’s about where our astute observations end: this is a fine screen, but we’d expect a little more for the price. Even QHD resolution would have helped make it stand out a bit more.