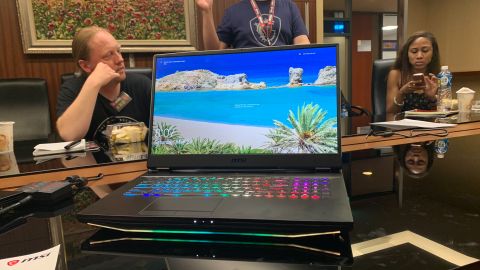 The MSI GT76 Titan is an absolute beast of a gaming laptop, and should demolish any game you throw at it. However, the high price and lack of affordability might put some prospective buyers off.

At Computex 2019, there are plenty of gaming laptops that are trying to be thin, light and inconspicuous – but the MSI GT76 doesn't even try. This gaming laptop is absolutely massive, weighing in at 8.8 lbs, and is packed front to back with RGB lighting and an aluminum build. It's not something you're going to be carrying around with you.

It's also packed with incredibly powerful hardware, including a desktop-class overclockable processor. But, the main question is going to be if whether the beefy innards and sleek gamer aesthetic will make up for the lack of portability and the high price tag.

Taking a quick look at the spec sheet with its Intel Core i9-9900K, up to 128GB of RAM and an Nvidia GeForce RTX 2080, we know right off the bat that this isn't exactly an affordable device. While we don't have exact pricing, we are told that some configurations of this laptop could run up to $4,899 (about £3,870, AU$7,125). We're not sure what the entry level models will run for, but one thing's for sure: if you want an expensive laptop, you've come to the right place.

As for when we'll actually see the MSI GT76 Titan, it's less clear. We don't have an exact release date, but it should be out by June or July.

Back when we got our hands on last year's MSI GT75 Titan, one of our biggest complaints was the cheap plasticky build and that stereotypical "gaming" aesthetic. That's all changed.

The lid of this laptop is aluminum this time around, with a slick, silver finish. There's still a big MSI logo around the back, but it's not the obnoxious black and red scheme of years past.

Then, there's the RGB, and believe us when we tell you that there's a ton of it. Not only is the keyboard and trackpad bedecked in lighting – with per-key illumination at that – but theres a huge RGB light bar on the front of the laptop. There are also a couple more spots around the sides with RGB lighting, and it looks pretty sick.

The apparent reason that the RGB lighting implementation is so good is MSI's partnership with SteelSeries, which has helped it make RGB lighting more customizable with smoother animations.

As for the keyboard, the mechanical one we loved so much last year has been replaced by MSI's standard gaming laptop keyboard. And, while we're not exactly pleased by this move, the new keyboard isn't bad, it just doesn't have the same clickiness as the previous model. We're told that this was because it saved space in the chassis, but it's already a thicc gaming laptop anyway.

And, when we say that, we mean it. The MSI GT76 Titan is 8.8 pounds and is a couple inches thick. You definitely wouldn't find us hauling it around in our backpack. But, this thick design does allow MSI to pack the cooling necessary for the beefy Core i9 processor and RTX 2080.

Finally, the MSI GT76 Titan has a wonderful display. The model we're using has a Full HD (1,920 x 1,080) IPS display running at 144Hz, but if you would rather use this level of hardware for 4K gaming, you can get a Ultra-HD display that covers 100% Adobe RGB.

Unfortunately, we weren't able to test the GT76 Titan in-game, as there weren't any games installed. But, we know enough about PC components to know that it'll blow pretty much any game out of the water.

This gaming behemoth is packing an Intel Core i9-9900K and an RTX 2080. Behind a Full HD (1,920 x 1,080) display, you should have no problem running basically every AAA PC game with the frame rates in the triple digits.

And, you probably noticed that the processor has that 'K' signifier, which means you can overclock it. We didn't get a chance to push it to the limit, but we're told that the GT76 Titan can get up to 5.0GHz on all cores. That's something we'll try to test out when we do a full review.

Even though we weren't able to run it through our full gamut of benchmarks and games, we're sure that the MSI GT76 Titan is an absolute beast of a gaming laptop. With its high-end desktop components and robust cooling solution, you'll be able to play pretty much every game at max settings without even breaking a sweat.

But, it's still a desktop replacement device, and that means it's big, bulky and not very portable. It even still requires two power bricks. It's also going to be very expensive, so it might not make sense for a lot of users.

Anyone who is in the market for an extremely powerful gaming laptop and doesn't care about pricing will fall in love with this thing, though. And, we will say that we're excited to get this laptop in and put it to the test.