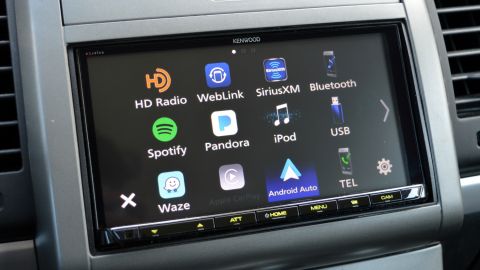 The Kenwood Excelon DMX905S is a great way to get Android Auto Wireless or Apple CarPlay into your car that doesn’t already have it – and it worked great in our testing.

Android Auto and Apple CarPlay are gaining steam, being sold in more cars than ever before.

But, what if you want to add the smarts of CarPlay or Android Auto to a car that you already have? That’s where aftermarket units like the Kenwood Excelon DMX905S come in as a way to make your car’s infotainment system a whole lot smarter.

Infotainment systems like this aren’t uncommon, and they play an important role in bringing the likes of Android Auto and CarPlay to cars that otherwise wouldn’t get it.

Before you’ll be able to turn the unit on and experience it for yourself, you’ll want to get it installed, and unless you’re very mechanically-minded, you’ll probably want a professional to do it.

Keep that in mind when you’re thinking about pricing – it’ll probably cost at least another few hundred dollars/pounds to get the device installed, especially if you need accessories like an adapter for steering wheel controls.

If installed properly, many of the components of the unit should be pretty subtle. For example, the unit comes with a microphone for Android Auto and CarPlay voice controls, and on my 2012 Nissan Sentra, it sits right above the rear view mirror, largely out of sight.

We also had connected USB/Aux port installed, which you’ll want to consider doing, too. While Android Auto Wireless is available on this unit, you’ll need to set it up with a wired connection, and there’s no USB port on the front of the DMX905S by default.

Once the Excelon DMX905S is installed you’ll notice that it’s basically all screen, with a row of buttons right under it. That row includes volume controls, a volume attenuation control button, a home button, a menu button, apps button, and a camera view button.

We found that while the buttons were easy to press, we didn’t love the fact that they were extended so far from the display. Not only was it a little unsightly, but it made touching the bottom of the display a little harder. We think the physical buttons should have been a little more flush with the display itself.

Apart from that, however, the Kenwood Excelon DMX905S is well-designed and should fit right at home in any car. Unfortunately, it won’t fit in any car, though. Head here to check compatibility for your car.

Of course, the real reason to buy this unit has nothing to do with its design – it has to do with the software it runs.

Not only does it run Kenwood’s proprietary software, but it also runs both Apple’s CarPlay and the wireless version of Google’s Android Auto.

First, let’s touch on Kenwood’s own software. In general, we found it was decently easy to use, but it’s not exactly the prettiest system out there.

From the main screen, you’ll be able to open up Android Auto or Apple CarPlay, and access an app screen with access to Waze, a phone app, and so on.

Generally speaking, we found it easy to navigate Kenwood’s software, but preferred to use the phone apps in CarPlay or Android Auto. That said, if you happen to not have access to Android Auto or CarPlay for some reason, you’ll still have some options. It’s pretty easy to simply pair your phone through Bluetooth and use the Excelon DMX905S as a basic Bluetooth device.

Of course, there are a ton of Bluetooth devices out there, and many of them are a whole lot cheaper.

If you’re thinking about buying the Kenwood Excelon DMX905S, then you’re probably more interested in Android Auto or Apple CarPlay. We won’t get into reviewing either of those systems here, but both worked pretty well.

In general, we found that the unit seemed to connect to CarPlay a little quicker than Android Auto, though that could partly be due to the fact that we were using an aging Google Pixel XL on the Android P beta during testing.

On top of that, there were a few bugs in Android Auto that may be related to the Kenwood unit rather than Google's software, like the fact that asking Google Assistant to make a phone call sent us back to the Kenwood home screen for the call rather than to Android Auto’s phone screen. Slightly strange bug, and one that resulted in us having to manually re-open Android Auto.

The Kenwood Excelon DMX905S is a great way to get Android Auto or Apple CarPlay into an older car.

While there are a few design quirks, and Kenwood’s software isn’t the best, it’s probably the cheapest way to get Android Auto Wireless without buying a new car, and it seemed to perform pretty well in our tests.

Of course, you’ll want to factor things like installation into the cost, and keep in mind that you’ll need to ensure that you can access a connected USB port after the unit is installed, but if those things don’t bother you, then this may well be the next in-car infotainment for you.