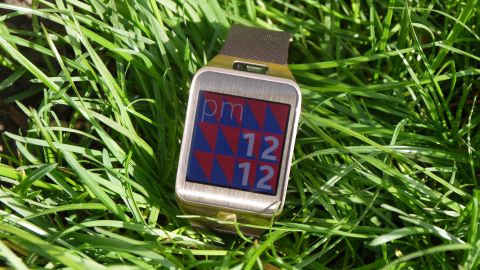 An upgrade worth waiting for?

Updates: Our Samsung Gear 2 review has been updated to reflect new firmware and increased competition from Android Wear.

The Gear 2 is a device that nobody thought would appear... at least not this soon after the first version. It's something of a climbdown for Samsung to relaunch a product so soon, but rather than call it embarrassing I'd much rather applaud Samsung for the feat.

Admittedly those that bought the first, expensive, model won't be happy there's a new one out already - but then again, it's a very nascent market and there won't be too many users out there.

The Gear 2 has a big change or two compared to the original: firstly, it's now running Samsung's jointly-developed Tizen OS rather than Android (though the original Galaxy Gear can now be switched to Tizen too), and it's moved the camera into the body of the watch, rather than forcing it onto the strap.

The overall look is much-refined and there's a bevy of new technology to make this worth a look if you dismissed the first Gear.

This means that you can now change straps on your Galaxy Gear, which is one of the main disadvantages we noted in the original. It's also now imbued with an infra-red blaster, meaning you can control your TV and set top box from the comfort of your own wrist.

You will need a compatible Samsung device in order to use the Gear 2, of which there are currently at least 18, including the Galaxy S5 and Galaxy Alpha, though surprisingly the Galaxy Note 4 isn't currently listed as officially supported.

While it's managed to bring in some key specs and improve the design somewhat, the Gear 2 is still a rather expensive smartwatch, coming in at £250 ($295, AU$350). That's close to the cost the original emerged at, and it suffered thanks to that price tag.

The reason is simple: while the Gear 2 is a cool thing to have (Samsung doesn't want it being known as an accessory, rather a standalone device) it still struggles to have a real use case, which is why dropping that much money can be a hard sell to consumers still getting to grips with spending so much on a smartphone.

To alleviate that reason for purchase, Samsung has decided to add in some fitness ability with the Gear 2 in the shape of a refined pedometer and a heart rate monitor, as well as exercise tracking so you can run, walk, hike or cycle.

The battery life is improved massively, the Gear 2 can splash around in water and dust thanks to being IP67 rated and comes in a range of nicer colours (rose gold and silver) and is generally a much better device - but is it worth the still-high price tag Samsung is commanding, especially when the Gear 2 Neo (the same smartwatch made out of inferior materials and dropping the camera) is so much cheaper?

Not to mention the fact that there are now Android Wear devices such as the Moto 360 and even Samsung's own Gear Live, which command lower price tags - or the Gear S which packs GPS and its own SIM slot.

The design of the Gear 2 is very similar to the first iteration of Samsung's smartwatches, but still manages to come with its own sense of unique style.

It's hard to explain, but the fact the strap is now a separate piece to the main body of the watch has forced Samsung to refine the design of things like the camera and the home button.

In fact, the latter part is probably one of the best bits of the reshaped Gear 2, with the home button now on the front of the phone rather than being a small plastic protrusion on the side of the watch.

This is important if you've got even a modicum of arm hair, as tapping the button would usually lead to pulling out a few stray follicles, meaning you're left with a Pavlovian hate of using your expensive new watch.

With the metallic button on the front, with a pleasant amount of travel, the experience is the same as far as the UI goes (long press to turn off or activate outdoor mode) and you can assign many options to the double tap action.

This means it's easy to access elements like notifications with the Gear 2 in sleep mode, and is a swift action too.

The Gear 2 isn't a small device, coming in at 36.9 x 58.4 x 10.0mm, but it doesn't feel cumbersome on the wrist. It's overt, that's for sure, and those that prefer a smaller and daintier timepiece won't feel like this is a great fashion accessory, but if you're looking to get your hands on a smartwatch it's not over the top.

The Sony Smartwatch 2 and the Pebble Steel are both better devices in terms of size, but Samsung's mixture of industrial design and more refined elements (like the camera and IR blaster integration) still brings an element of premium quality to proceedings.

The screen, a 1.63-inch OLED affair, is excellent too. It's not great if you're trying to do anything with high res images, such as pictures or similar, but it's fine for any snaps you've taken using the Gear 2.

The contrast ratio of the OLED screen means if you're doing something like timing your food, checking out how many steps you've taken or just flicking through music, it looks really nice and is a pleasant experience on something you've spent so much money on.

Design-wise I'm a real fan of what Samsung has done with the Gear 2 - it's hard to fault the industrial design that won plaudits in its last iteration from jewellers. The screw holes might have disappeared, which is something of a shame given than added to its premium industrial design, but it's still got a very sleek look to it.

Though since release it's arguably been outshone by the circular styling's of the Moto 360 and LG G Watch R, while the premium Apple Watch is also turning heads.

Being able to change the straps will be a real boon to some users, but I quite like the straps that match. I'm not a massive fan of the Rose Gold colour that I had on test, but it still drew some admiring glances from others.