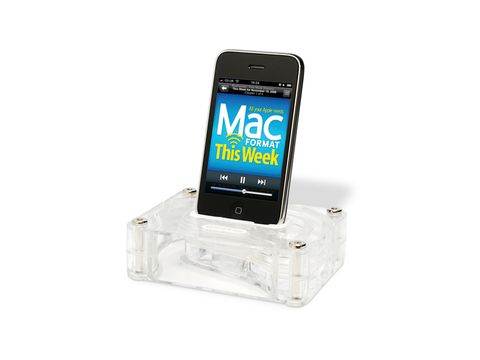 The Griffin AirCurve is, no doubt about it, one of those products that is guaranteed to draw an 'oooh' and an 'ahhh' from anyone who has the pleasure to plug their iPhone into it.

The premise is a simple one: using a canal that goes from narrow to wide, the AirCurve amplifies the iPhone's downward-facing speaker. And it really works.

Fire up the iPod app, select a track, plug in and the whisper-quiet(ish) iPhone speaker suddenly becomes much louder. Take it out – quiet. Put it back in – louder. And repeat. You'll probably get the £15-worth of value in the first 20 minutes by impressing your friends with what a lump of polycarbonate can do.

But let's get one thing straight. With no electronics, dock or anything like that, the AirCurve isn't going to turn your iPhone into a fully fledged sound system. What it does do however, is amplify what is a pretty dodgy speaker to an impressive level for a lump of clear plastic. And that's about it, really.

The Griffin AirCurve is great for bathrooms and those other places where electricity doesn't really have a place. It's also pretty cool as an alarm clock dock. And as a portable speaker system for the iPhone it's really quite a nice solution, coupling extreme portability with average sound quality.

One major gripe though is the way you charge your iPhone while it's on the AirCurve. It would be nice to have some kind of port where you plug the dock connector in and then your iPhone is charged while sitting on the unit. However, the charging solution is pretty much a hole – and one that doesn't secure the dock connector. So actually connecting the iPhone while in the AirCurve is a real pain.

At £15, the Griffin AirCurve is good value for money. Pass-through slot issues aside, it amplifies the iPhone's puny speaker to good levels.

Due to the source it's amplifying it's going to be better for podcasts and spoken word, but that said, if you're in the park and fancy a bit of AC/DC, the AirCurve is easy to carry around and easy to use.