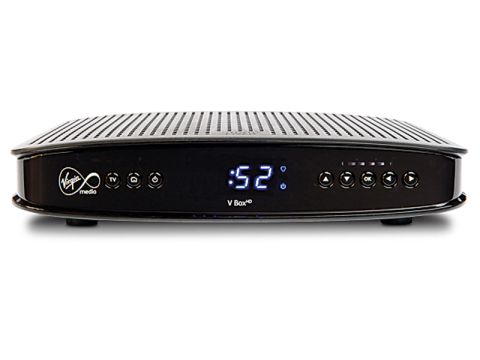 The monthly price of multichannel hi-def TV has been slashed with the introduction of Virgin Media's latest set-top box, the Virgin V Box HD.

The first in what promises to be a new range of receivers and PVRs, the HDD-less V Box HD, made by Cisco, allows subscribers to the cablenet to get on-tap HD without a monthly surcharge (a la Sky).

Virgin Media customers just need make a one-off, £49 payment (plus £35 installation charge) to get hold of one.

Unboxed, the unit is a little larger than first imagined, and sports a distinctive curved chassis. Once up and running, there's a similarly oversized blue LED display dominating its fascia. This allows it to function as an oversized clock.

Seven forward facing buttons offer full navigation even without the rather routinely styled remote handset. One curiously features a 'heart' graphic which illuminates to confirm your box is connected to the Virgin TV network.

Once viewing card and receiver have been paired and authorised, you're up and running.

The user interface is no different from that seen on the company's V+ PVR: a simple, but effective, grid-based guide with Mini TV windows running top right. This iteration of the trademark GUI is very fast and responsive to navigate.

Alongside this healthy selection of linear HD TV is by far the best VOD choice in the UK TV market. Drill into the menus and you'll find more than just Catch-up TV variants (although these are also comprehensive and can be searched by either channel or day).

Genre-specific strands support special (and general) interests, such as Sci-fi and fantasy, Sport, Comedy, documentaries and more. Elsewhere branded offerings like Warner TV and HBO allow (at least partial) season runs of big shows to be revisited; there's also a reasonable selection of music clip packages – plus adult-themed material for those that fancy it.

Apparently, the TV on demand library now offers over 4,600 hours of telly, so it's unlikely you'll ever run out of stuff to watch.

It's worth noting that Virgin Media's implementation of the BBC iPlayer is that unlike any other living room platform. Uniquely you can catch-up selected shows in HD as well as SD.

The quality of streamed HD is astoundingly good. With so much Pull content available it's rather easy to get over the lack of any hard drive recording capability. Such content richness also elevates the V Box HD away from the likes of Freeview HD set-top boxes and prompts the question: when so much telly is available on demand, do you really need a hard drive at all?

For causal (but considered) viewers, the answer is probably not. Equally, the V Box HD makes for a brilliant second source in a multiroom TV installation. If you want to feed off Virgin Media's TV smorgasbord in a secondary den or bedroom it's an ideal solution. And, of course, no HDD means zero noise.

It's unclear at present just how the V Box HD will sit within the upcoming Virgin TiVo landscape.

The characteristic TiVo user interface is radically different from what's on offer here, although the hardware itself would seem to be a perfect fit for the linear TV/iPTV mash-up of services planned. It's possible that a firmware upgrade could be used to bring to V Box HD in line, although the difference may be so jarring for users that the cablenet could be reluctant to go in that direction. Wait and see.

Virgin Media offers a variety of TV packages, which vary in cost depending on the services taken (TV, broadband, phone line). If you opt to take just its TV package, prices start at £11.50 and rise to £29 per month.

TV service costs falls dramatically though when you bundle it with a phone and broadband package. It's best to check the Virgin Media website for deals, as money can often be saved on installation.