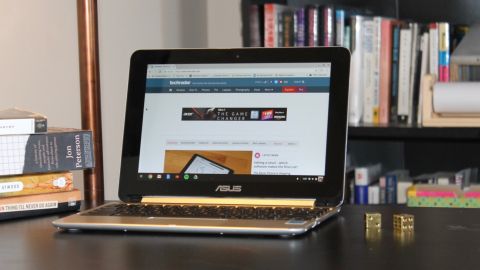 The old ‘jack of all trades, master of none’ maxim best describes Asus’s convertible Chromebook, the Flip C101PA. Besides a great battery, it has little else to crow about. This laptop’s budget price, however, gives it value as a backup device.

What it lacks in size, the Asus Chromebook Flip C101PA makes up for in names. It’s a mouthful, but at 1.9 pounds and under 11 inches in width, this Chromebook is not a bagful. That, plus its 12-hour, go-go battery are the C101PA’s best qualities.

That said, it’s not without a market. The C101PA is a fine backup device, and a better-than-decent media ‘tabtop’ that isn’t afraid of trains and/or tiny dorm rooms.

Here is the Asus Chromebook Flip C101PA’s configuration sent to TechRadar for review:

The rest of this laptop's specs, however, are fairly standard for a budget Chromebook: 4GB of memory, 16GB of storage and a barely-HD screen.

Decidedly non-standard is the C101PA’s processor. Rather than the Intel Celeron or Core i3 that’s ubiquitous in these laptops, the C101PA runs on a Rockchip OP1. A little research yields some clues as to why Asus went with the “rock”: the OP1 is very mobile-friendly – a better fit perhaps for the tablet-style C101PA.

Where the R11 differs from the C101PA is in its storage (32GB local) and processor (budget-standard Intel Celeron). It’s also, of course, a tad cheaper.

The conventional – it’s just a laptop – $199 (about £229, AU$499) HP Chromebook 14 is older, larger and sharper (14-inch HD screen) than the C101PA, though the two are similarly kitted out on the storage and memory front. HP’s device also runs on – you guessed it – an Intel Celeron processor.

With its silver finish and black bezel and keys, the C101PA is clearly MacBook inspired. That’s not a criticism necessarily – kudos to Asus for making a little Chromebook that looks just as stylish as Apple’s flagship laptop.

As expected for a device that’s part tablet and needs finger-gripping room, the C101PA gives up much of its screen’s real estate to the previously-mentioned black bezel. Additional tactility is provided by the screen and back panel’s stiff construction.

All this finger-friendly space has the unfortunate effect of making the C101PA’s small 10.1 inch screen appear even smaller. The bezel doesn’t just frame the screen, it swallows it up.

The C101PA’s full-flex hinge allows the Chromebook to execute its namesake: it flips smoothly, though not effortlessly, into tablet mode, and without any NASA-level mechanics, locks or funky twists.

Because the C101PA simply rotates on its hinge, the keyboard in tablet mode awkwardly faces south, directly at your lap, table, or, most likely, hand. Manipulating the C101PA as a tablet feels like playing a saxophone – you’re going to get a fingerful of keys whenever you pick it up. It’s disconcerting but not disastrous – the keys turn off in tablet mode – though we wonder what effect this saxophone setup will have on the C101PA’s long term keyboard health.

Also awkward is the C101PA’s supposed touchscreen. Finger scrolls and flicks work fine, but icon pressing, particularly small ones like a tab’s ‘X’ or browser’s ‘back’ arrow, is too often an exercise in futility. Be prepared for frustrated screen jabbing.

At least its touchy touchscreen is clear and colorful with wide viewing angles – those essentials-for-a-tablet Asus got right.

The C101PA’s touchpad isn’t given a lot of space, but it makes do. It swipes and scrolls as well as any device and has a springy, tactile ‘click’ that works all over the touchpad.

This well-engineered usability helps the touchpad feel larger than it is.

The same can’t be said for the C101PA’s keys: they’re small and feel as much. Neither their actuations nor the well in which they sit are particularly firm.

The real estate they’re given is also sparse: your hands practically end up on top of each other as you type. An enterprise or school-ready device the C101PA is not.