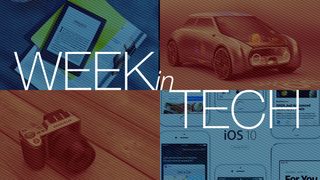 It's summer time and the living is easy: the festival season has started, there's a new version of iOS incoming and, as always, there are tons of amazing new gadgets to get excited about. And that's not all… This week we saw a very unusual vision of the future, and we discovered the truth about the high-tech cars we'll be tooling around in in 2026. It's an – ahem – wheely interesting Week in Tech!

There's a new Kindle in town, and it looks awfully like the current one – but it's better in five key ways, as James Rogerson explains. It's 16% lighter than the current Kindle, thinner than the current Kindle (but not the flagship Voyage, which is 1.5mm thinner), it comes in a choice of colours, and all these things come without a higher price tag. Whether you fancy a basic Kindle, a fancier Paperwhite or a top-spec Oasis, we've collated all the best Kindle deals for you right here.

Mirror mirror on the… er…

Camera legend Hasselblad has a brand new medium format camera, the X1D, and there's no mirror in it. That means the sensor gets light directly, and the camera body can be slightly smaller. So what do you get for $8,995 (about £5,990 GBP / AU$12,054)? A 50-megapixel sensor with 14 stops of dynamic autofocus, full HD video and an ISO range of 100 to 25,600. It's an amazing camera, and you can read Angela Nicholson's hands-on review here.

iOS 10 is coming to public beta very soon, and it's going to save you stacks of time and effort: as Christian De Looper shows us, there are lots of brilliant new features that'll make all kinds of things easier. From the Universal Clipboard to context-aware QuickType, rich notifications and a smarter Siri, we've rounded up the iOS 10 features you'll wonder how you lived without.

It's the famous Glastonbury festival this weekend, and all over the world the festival season is getting into full swing. But what tech should you take with you? Kate Solomon knows. "The PR machine will grind into gear and tell you that you need a GPS tent finder, a 4K tablet of some kind and a Bluetooth subwoofer before you can even think about setting up your pitch," she says. "But we're here to tell you: don't be silly. The real answer to the question of what tech you should take to a festival is somewhere between 'none' and 'as little as possible'." Find out what you really need right here.

It's a MINI adventure

Mini has unveiled a brand new car with a truly awful name: fancy a Vision Next 100, anyone? But while the name is naff the car is anything but, because it's Mini's vision of THE CAR OF THE FUTURE! As Hugh Langley reports it looks "totally barmy" with sliding doors and an "all-knowing, all-seeing eye" that tailors everything just-so. It'll also have an "inspire me" button, which will take you to a place recommended by other Mini users. What could possibly go wrong with that? How will you drive in a decade?

Concept cars are fun, but what will we really be driving in 10 years time? Jeremy Laird knows and chances are, your 2016 motor won't be fully autonomous. The issues aren't technical but legal: "Legislation and even public sentiment (think killer robocar stories in tabloid newspapers), along with issues such as insurance liability (who's responsible when an autonomous car crashes?) are just as critical." Laird discovers some really exciting car tech, but perhaps the most exciting news of all is that the sheer fun of driving isn't going to go anywhere: as one leading car maker explained, "the ability to drive yourself, to have fun, will remain core".