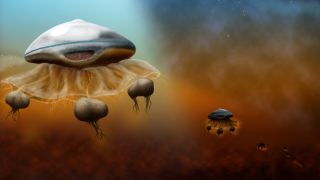 Alienwear - Forget everything you ever thought you knew: aliens now look like jellyfish with tiny radishes attached and not like Mr Burns on a bad day. Jeez, next you'll be telling us dinosaurs had feathers. [Mirror]

Furb off - Gird your loins: Furby is back and he/she/it has brought an iOS app with it. The horrendous little robotic ratbag is even more hideous than before and no doubt the app-addition simply adds to the irritation it can inflict on older (read: better) siblings the world over. Although we will concede that it's possible that OMT does not entirely understand the what 'gird your loins' means. [CNET]

Litter on Mars – Ground control to Major Tom – can you pick up some of this space crap we've strewn around Mars please? The Radish Jellyfish are not at all impressed. [NASA]

Double rainbow - The colours Asus has chosen for these Nexus 7 tablet cases look familiar. We wonder where it got its inspiration. [Twitter]

Vol-au-vent - Word Lens, the magical iOS app that awed us with its ability to read and translate other languages using a phone's camera is now available on Android from Google Play. Sac magique! [Google Play]

Short shorts – Virgin Media is on its annual prowl for the best amateur short films the world has to offer. Evidently we're a bit late to this since the closing date is July 12 but you've got an imagination and a smartphone right? There's £30,000 up for grabs so get to it. [HCC]

Curiouser and curiouser - Peter Molyneux has invented a new game or a social scam, you tell us. Basically there's this giant virtual cube, right, and it's made of 60 million cubelets which users chip away at in the hopes of being the person to remove the final block, at which point they win something "so amazing… it'll appear on news reports". All we know at this point is that it is not a dead cat. Wherein lies the scam? You can buy super tools that remove 10, 100 or 10,000 blocks at a time for as much as £32,000. [Wired UK]

Pipe down - Facebook, Twitter and other braggy social networks make people feel anxious, inadequate and generally terrible, says a new study commissioned Anxiety UK. You know what makes us anxious? Studies that speak to only 298 people then try to make out like the findings are representative of the world at large. [Metro]

4D or not 4D - Like the word 'fetch', 3D is only just about happening, but Hollywood isn't letting a little thing like that stop it from embracing 4D cinemas that bring the smells and feelings of movies to the, er, movies. South Korean firm CJ Group has a plan in place with a major US cinema chain and where the US leads, you can bet the UK will follow. [SlashFilm]