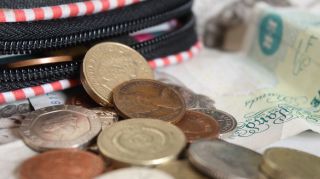 Money as a concept has changed a lot over the years - from mounds of salt back in Roman times ('salary' is derived from the Latin for salt) through to gold, then innumerable currencies and now to today's vast digital transactions. Sure, there's a lot of cash still sloshing around, but the big deals are all electronic.

Increasingly that's trickling down to us consumers too - from Wave and Pay in your local city bar, paperless bank statements and Oyster cards, through to rumors that Denmark is planning to go entirely digital. old money is on the run.

What's surprising is that your established high street bank is currently all in favor of digital transactions - they're cheaper to manage and a chance to slice off a fee.

But once consumers are happy with purely conceptual money then the role of banks themselves may start to change, and there's a wealth of alternative 'versions' of cash out there which are ready to exploit the new chapter of currency.

The best-known of these alternatives is probably Bitcoin - more details on that below - and these could really change our banking world fundamentally, if enough of us decide to trust them.

The changes coming our way are pretty big: from just altering the way we spend our cash to completely new types of money that could alter the financial landscape of the world, there's a lot to get your head around - so here's some help on that front.

The behemoth of digital currencies, Bitcoin isn't just an alternative method of spending money. Its creators proposed that it could replace the traditional financial system entirely, ushering in a new utopia of hassle-free, unfettered consumerism.

The key to the open-source distributed digital currency is that, unlike pounds or dollars, nobody owns or manages it, so it depends almost entirely on the trust of its users.

The central technological achievement is that all transactions are recorded publicly, within the 'blockchain cypher' which Bitcoin is based on, which means the lack of central 'owner' isn't an issue. There are many sites online where you can view Bitcoin transactions, such as this one.

Although it's free to use, it's a complicated technology to set up - there are 12 wallets recommended by the Bitcoin foundation alone, and many other options you could fiddle with if you choose.

Because it's based on open source software everybody has access to the code, including criminals, so it's vital to check that your chosen software packages are from a reputable source, and haven't been tampered with.

Finally, due to a limit on the total number of 'Bitcoins' that could ever be created, its future isn't assured as the money is literally running out.

However, the blockchain cypher which underpins Bitcoin may prove to be the long term winner, as the technology is being adopted and built upon by hundreds of companies. Maybe that new financial system will be a reality after all.

As Bitcoin has struggled with public perception, a more flexible and investor-friendly rival has been rocketing in value. Ethereum was crowdfunded in 2014, and is run by a Swiss non-profit.

It takes the blockchain principle - in which all transactions are automatically and publicly logged without the need for a central agency - and opens it up for developers, and indeed anyone.

Because it's decentralised anybody can use it to create almost any kind of trading system imaginable, and there are hundreds of 'apps', created by both businesses and individuals, that offer new ways to do a mind-boggling array of tasks, from credit checks to trading to noise monitoring.

The 'wallets' are standardised, so while you can create your own currency you can also buy or trade others easily. You could create your own marketplace, build contracts with anybody else on the system, or make escrow-type deals.

This flexibility built on top of blockchain has led to companies including JPMorgan Chase, Microsoft and IBM describing Ethereum as a sort of Bitcoin 2.0.

They've been investing too - JPMorgan has built a tool called Masala that lets some of its internal databases interact with an Ethereum blockchain.

On the downside, the inbuilt flexibility makes the software even more complex than Bitcoin, and Ethereum is so new that it's hard to predict how popular it will become. Still, who expects creating a new currency to be easy?

Circle is a 'social payments' app for Android, iOS and the web that aims to get you making payments more easily and cheaply than ever before.

The main thrust of this is a slick app interface, where you can send or receive money immediately (along with emoticons or GIFs to convince your contacts to pay up).

There's a group request function too, so if you've shared a cab with a group of friends you can all chip in the next day. Download the app, link a card and you're off.

The interesting bit is that there are no transaction fees at all, and you can switch currency from pounds to dollars if you like, all for free.

Part of the reason for this lovely freeness is that Circle is based on open internet standards and protocols, including blockchain, so doesn't have to deal with the costs associated with traditional banks.

However, it's far from unregulated - Circle has an Financial Conduct Authority E-Money Issuer license, the first one ever issued to a consumer internet firm for cross-border payments with blockchain technology.

It's also partnered with Barclays Bank in the UK for additional trustworthiness. As it's a relatively new launch it's hard to say how popular it'll be, but being free and 'social' never hurt...

LEOcoin is based on a blockchain algorithm too, and can be mined just like Bitcoin - it's based on Litecoin code, which is a licensed variation of, but extremely similar to Bitcoin. LEOCoin aims to be 'the entrepreneurs' digital currency of choice' and goes about this by being more secure - or so the founders claim - than Bitcoin; truly anonymous, and easier to use.

The process of downloading a wallet, then either buying or 'mining' your own LEOcoins is simplified, mainly by restricting the wide-open-choice nature of Bitcoin.

Another key difference is that by just maintaining a LEOcoin 'wallet' with coins in it you automatically accrue 'interest' at 4%, by being allowed to generate additional coins.

LEOcoin points out that this "is an excellent way to convince investors to hold on to their coins for an extended period". However, the product hasn't gained widespread traction yet, being still in the soft launch phase, so perhaps don't head out and change all your cash for LEOcoins just yet.

Mobile payments have been promised for aeons - m-wallets were touted alongside WAP all those years ago - but they're finally here, right? Well, kind of.

The technology certainly is, and if you've got an Apple device you'll be familiar with arguably the best thing the Apple Watch can do: Apple Pay. Simply wave your watch or iPhone near an enabled reader, double tapping the watch button, or holding Touch ID, and beep, you're done.

It's secure, as your actual card details aren't bandied about the ether, and it's accepted all up and down the high street - assuming the merchants have an NFC-enabled reader.

Samsung Pay is the Korean giant's answer to Apple Pay, and is currently available in the US and Korea, using Note 5 handsets and up (basically S6 and S7 variants), and only with select Visa, MasterCard and American Express cards from participating banks.

However, Samsung's use of tech called MST (Magnetic Strip Technology) as well as NFC means that non-NFC-enabled readers will be able to accept transactions, which will bring many more retailers into the fold - especially when it completes its launch in the UK.

Finally, there's Android Pay, which is more akin to Apple Pay, in that it's NFC-terminal only. It's slowly rolling out worldwide.

Download the app onto your Android 4.4 or later phone, register a card, and you're off and spending. At launch many Visa and Mastercard credit and debit cards will work with the app, although in the UK Barclays customers are locked out, due to the bank having it's own payment schemes up and running.

One of the stalwarts of the anti-cash brigade, Paypal has been pushing the 'end of real money' for more than a decade. One Touch is its latest product, which keeps you logged in on a 'trusted device', making purchases is possible in a single click.

In practice this means you enable Paypal Touch on a device - say your Macbook - and it logs the details of the device and the browser ID. That device and browser combination can then be used at PayPal merchants with a single click, and of course your source credit card or debit card number isn't shared with merchants.

There are no transaction fees for consumers, and PayPal adds an extra layer of consumer protection on top of your card issuer, so if an item doesn't arrive or is significantly not as described you can claim a refund from PayPal - often a much easier process than going through your bank.

You're also covered by PayPal's fraud protection, which monitors your transactions 24/7 for suspicious activity - although the company does recommend you don't enable One Touch on a public computer for obvious reasons.