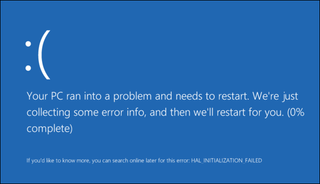 After a number of well-documented problems with the Windows 10 October 2018 Update, Microsoft released a cumulative update aimed at fixing a number of issues and bugs, however it seems like that update is causing dreaded Blue Screen of Death (BSOD) errors on some HP computers.

As Windows Latest reports, the Windows 10 KB4464330 patch for the Windows 10 October 2018 Update is causing Blue Screens of Death, where the PC becomes unresponsive, and displays a blue error screen, due to incompatible drivers on certain HP computers.

A user who experienced the issue with their HP EliteDesk 800 G3 claimed on a Microsoft answers forum post that their PC no longer boots after installing the cumulative update.

We seem to be seeing a number of blue screens from clients today following the latest #windowsupdate. Anyone else got problems? #Windows10October 11, 2018

In the Twitter exchange above, it's suggested another update, KB4462919, appears to be the problem.

If you have an HP computer, it’s worth holding off installing any updates until Microsoft or HP addresses the issue.

However, if you’ve installed it and are experiencing problems, it looks like deleting the HpqKbFiltr.sys file from the system32/drivers on your PC will help.