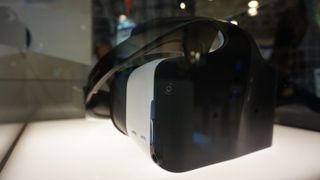 These days, everyone's making a virtual or augmented reality headset.

Facebook owns Oculus, the makers of the Rift. HTC and Steam partnered to release the Vive. Sony is releasing PlayStation VR for its PS4 game system on October 13. Razer has already released the OSVR HDK 2, and AMD is collaborating on an Oculus Rift rival of its own with a company called Sulon Technologies.

Heck, even 170-year-old lens maker Carl Zeiss is getting in on the action.

My point here, obviously, is that the virtual and augmented reality headset market is a crowded space. But that competition didn't stop Intel, world-leading producer of CPUs, from jumping headfirst into the fray with its brand-new platform, Project Alloy.

The headset was announced by Intel CEO Brian Krzanich at the Intel Developer Forum held in San Francisco and while there's some very obvious comparisons to the half-dozen other headsets on the market already, Project Alloy has some very key differences: it's completely tetherless, doesn't need any external sensors and it will be powered by a 6th Gen Intel Core processor. Krzanich called it a merged reality headset – a headset that can switch in-between augmented reality and virtual reality putting you into a virtual environment surrounded by real, physical items.

Krzanich joked that with merged reality you could experience all the joys virtual reality had to offer without the pain that true, all-immersive VR brings – e.g. no more bumping into walls, putting your hand through the TV and falling off the stage during a presentation because you couldn't see what's in front of you.

Taken at face value, Alloy looks like it's a smart take on a crowded genre, but when will it come out and what, exactly, can you expect to use it for? Krzanich had few staunch details to share. We know that Intel is aiming for the second half of 2017 for a release date, and that it'd like to get units into developer's hands by December of this year, but there's been no word on how much it'd cost or what developers have already signed on board.

Then there's also the elephant in the room to consider – Microsoft's own AR/VR platform, HoloLens, that in many ways looks significantly better than Project Alloy despite being announced over a year ago that could kill Intel's latest tech before it ever takes off.

While we may not know everything about it just yet, here's what we know about Intel's vision for merged reality so far.

Project Alloy, aesthetically speaking, seems like a cross between Sony's PlayStation VR and Samsung's Gear VR – it's mostly covered in pristine white plastic minus the back headband that packs a battery and tightening screw.

It's an easy comparison to draw to the Gear VR – not only are the colors the same, but there looks like there's a lightness about the headset … not that Intel is letting anyone try one on this early in the game.

If you've come to be an expert in the field of virtual reality over the course of the last few months since the Rift's launch, you might notice that Project Alloy doesn't have any tracking dots or divots. That's because the headset has enough data to know exactly where it is and what orientation it's in – or at least that's what Intel says.

The other noticeable difference – well, besides the lack of a wire running to a PC – is that Project Alloy doesn't use any sort of controller. Now, that doesn't mean you won't be able to select options once you're inside the semi-virtual world. On the right side are two buttons, C1 and C2, which will likely act like the A and B buttons on a controller.

So how, exactly, does it perform?

It works well … sort of. Saying that Project Alloy works well in its current state requires a bit of qualification.

First off, there's almost no one – except Krzanich himself – who can say what it's like to use Project Alloy. Intel is keeping most of the details on it, as well as development kits themselves, close to its chest at the moment.

That said, as a virtual reality helmet everything looks fine. Even without the massive processing power of GPU to run the show, Alloy seemed to create a convincing reality while Krzanich was on stage. In the live feed shown to the audience there was almost no detectable tearing or troubling low polygon count. It looked close – if not identical – to the Oculus Rift.

Well it did until Krzanich came too close to the headset. Then all hell broke loose.

Because it's an merged reality headset, Alloy pulls in objects from the real world. This would be neat if the camera could recognize an object – like, say, your hands – and created a one-to-one digital representation of them in your virtual space. It can't.

What Alloy can do is pull in the live feed of your hands from the real world and put them into your virtual world, graininess and all. The final product looked as frightening and as experience-breaking as you'd expect.

Now, that might change once more developers get their hands on it – Intel is partnering up with Microsoft to optimize Windows-based content and experiences on Intel-based VR devices such as Alloy – but that's no guarantee that augmented reality products will ever look natural in virtual reality.

Intel isn't afraid to break new ground. It's crushed processor sales for years, and is now looking for new ways to partner with content creators. Project Alloy, like Intel Joule and any of the RealSense camera technology, is just one more way for Intel to get its products into the world and into the next-generation of heavily commoditized products.

And while it might feel to some like another entry in a crowded genre rather than something completely and utterly jaw-dropping, Project Alloy has potential. When Microsoft and Intel work together, the two usually achieve more than either could on its own.

If the two can sit down and develop a set of standards for all Windows-based headsets to follow, content developers will surely jump on board. If it can't, well, there's a small chance that Alloy might become vaporware by this time next year.