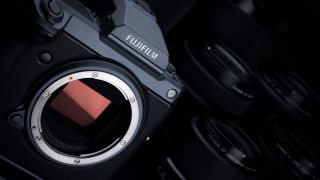 After teasing us for the last few months, Fujifilm has finally confirmed its GFX 100, a camera that promises to deliver insanely detailed images from a new back-illuminated 102MP medium format sensor.

That's a considerable step up from the 51MP sensors inside the company's current GFX 50S and GFX 50R cameras – and there's much more to this camera than its sensor, of course.

From the 5.76 million-dot electronic viewfinder through to the five-axis image stabilization system – which, on a medium format camera, is mightily impressive – and its 4K video capabilities, there's heaps to get excited about.

The sensor is the star, though, and it's the files it produces that are the reason for all the excitement. But GFX 100 isn't the only camera that can produce 100MP-plus images, nor is it the cheapest – so, whether you're looking for cheaper option or you've got money to burn, here are five other resolution monsters to consider.

100MP? Panasonic sees you, Fujifilm, and raises you 87MP.

While the S1R packs a 47.3MP sensor – the most populated in any full-frame mirrorless camera right now – it can output 187MP images when set to its High Resolution capture mode.

This captures eight individual 47.3MP files, then blends them together into a single composite. Impressively, you also get a raw file at the end of the process, rather than a JPEG, so you can process your super-high-res image just like you would any raw file.

The S1R itself isn't exactly cheap, of course, but it's less than half the price of the GFX 100, with a lens included. There's also an alternative, the even-more-affordable S1, which has its own High Resolution option that can spit out 96MP images. Not quite 100MP, admittedly, but not so dissimilar for it to make any difference in practice.

Like Fujifilm, Hasselblad has also been focusing on getting its medium format mirrorless range established, with the X1D-50c and accompanying lenses surfacing in the past few years. But if you're happy with a more old-school mirror-toting option, the company's H6D-100c is another 100MP camera that makes the grade.

Medium format specialist Phase One introduced its IQ4 range last year, with two 151MP medium format backs, one being a full-color option and another achromatic (i.e., black and white). On top of that, the system also offers a third back, which sports a 100MP trichromatic sensor at its heart.

These sensors are physically larger than the ones inside medium format mirrorless cameras, and also claim to offer up to 15 stops dynamic range. But if you thought the GFX 100 was expensive, the IQ4 will help to put things into perspective: you won't get much change from $43,000 / £30,000 for the 100MP back alone, let alone the higher-resolution options and the complete kits with the body and a lens.

100MP not enough? 187MP still leaving you underwhelmed? How does 400MP sound?

The H6D-400c may be based around a 100MP CMOS sensor, but, like the Panasonic S1R, it comes with its own Multi Shot mode that can output files far higher in resolution than the native pixel count.

If your budget won't stretch to Phase One's IQ4, you can slum it with last season's XF IQ3 instead.

Like the Phase One IQ4 above, this also comes in color and achromatic options, each being a 101MP CMOS sensor developed with Sony. There's Vibration Tracking and an electronic shutter to help keep the camera stable during that critical moment, and a particularly neat bonus is the option to have the shutter open for a whole hour, for super-long exposures.