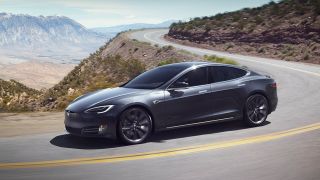 Tesla could use a consistent run of good press at the moment, though it doesn't look likely to happen this weekend – the Tesla Model S of director Michael Morris apparently caught fire "out of the blue" in California, an incident captured on video by his wife, actor Mary McCormack (embedded below).

Initial assessments suggest a faulty battery pack could be to blame – due to either a production error or an impact on the road – but as yet there's been no official explanation for what happened. Tesla says it's investigating, calling the event "an extraordinarily unusual occurrence" in a statement.

The good news is that Morris and McCormack emerged unscathed, and the fire was quickly put out. According to reports, passers-by flagged down the couple after noticing the car had caught fire while in traffic, so they were able to pull over and get out (and film what happened next on Twitter).

@Tesla This is what happened to my husband and his car today. No accident,out of the blue, in traffic on Santa Monica Blvd. Thank you to the kind couple who flagged him down and told him to pull over. And thank god my three little girls weren’t in the car with him pic.twitter.com/O4tPs5ftVoJune 16, 2018

Tesla will be keen to emphasize that cars of all types can catch fire and develop faults, but as it looks to push its new technology towards the mainstream, it's going to have to make sure incidents like this are swiftly explained and dealt with to prevent them reoccurring.

Most recently the firm's self-driving Autopilot technology has been put in the spotlight again, after a car under Autopilot control crashed into a stationary police car – and another Autopilot update is planned soon. Innovating isn't easy, especially in the motor industry, and unfortunately for Tesla boss Elon Musk it tends to come with added scrutiny too.

In better news for the company, a leaked email from Musk shows Tesla is now producing 3,500 Tesla Model 3 cars a week, as it looks to hit a 5,000-per-week target by the end of July. After a recent temporary shutdown of production, it sounds like the assembly lines are back on track.