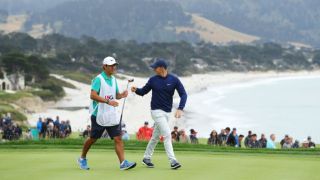 We just don't know which way the 2019 US Open is going to turn next. Gary Woodland tops the leaderboard going in to Round 4, but there are some of golf's biggest names and best players chasing hard. Make sure you can watch all the action as we tell you how to get a US Open live stream from anywhere in the world - there's even a FREE option to enjoy the Pebble Beach golf, too.

Gary Woodland has the clear outright lead after Round 3, but second-place 2013 champ Justin Rose is favorite at the bookies at the time of writing. The big question of the week remains whether Brooks Koepka can be stopped after winning the last two editions of the US Open and coming off the back of an impressive PGA Championship victory - he's only a few shots behind.

119th US Open Championship - where and when

The world famous Pebble Beach Golf Links near San Francisco in California is the idyllic setting for the 2019 US Open. It's the sixth time that the US Open will be held there.

But what of the resurgent Tiger Woods? He's surely too far away at this stage to make an impact. Tiger still has the record for the biggest ever winning margin in a major tournament at this very course at the 2000 US Open. But he's a few shots back at the time of writing.

The great news is that you can see exactly how it will all play out - the birdies, the bogeys and everything in-between. We can tell you how to watch all the Round 4 action, even if you're outside the United States. Keep reading to see how to get a 2019 US Open live stream from any corner of the Earth.

Well here's a stroke of good news (pun very much intended) if you're looking to casually follow the golf online. The official tournament website, USOpen.com, will be live streaming some of the best action.

But, it's very limited in what it can offer this week. The schedule currently says that it will be showing a US Open live stream of featured groups every single day, as well as shots at holes, 7, 8 and 17. That's great if you're only interested in following the players it selects for you, but not so good if you want full and proper coverage.

Aside from the USOpen.com live stream, we have more US watching options below.

We're going to guess that if you've landed on this page, you're going to want something more extensive than that free stream described above. For you, we have full details on which networks are showing the golf in the US, UK, Canada and Australia.

Try to watch your domestic US Open coverage while out of the country however, and you'll soon be faced with a block. That's because broadcasters implement a geo-restriction to stop non-nationals from watching their coverage. Fair enough, but annoying if you've paid for a pricey subscription and still want to watch.

If that sounds like your situation, then we'd recommend grabbing a VPN (assuming it complies with the broadcasters Ts&Cs, of course). This software lets you change the IP address of your laptop or mobile to one in a different country, and therefore appear like you're back at home.

They're really easy to use, too - especially ExpressVPN, which is the best provider of the 100+ we've tested. It also benefits from having speedy connections to faraway servers, watertight security and is compatible with Android, Apple, Roku, Amazon Fire TV, PS4 and loads more. It's currently leading the way in our best VPN countdown:

1. Express VPN (comes with a 30 day money back guarantee)
This is the #1 rated best VPN in the world right now. You can watch on many devices at once including Smart TVs, PC, Mac, iPhone, Android phone, iPads, tablets etc. Check out Express VPN and you can also get 3 months FREE with an annual plan. Or, if you'd prefer, take advantage of its 30-day money back guarantee.

3. IPVanish supports up to 10 devices, so great on the go.

It's worth bearing in mind that Virtual Private Networks are much more than just a way to watch sport while overseas. Loads of people now download them as a first line of internet security, thanks to their encrypted tunnels and anonymity online. VPNs are also popular for watching foreign Netflix catalogues and getting around blocked websites.

How to watch the US Open golf in the US

Fox is the official broadcaster in the US, which is ideal if you're at home and have cable. The coverage is being shared between the main Fox channel and FS1.

Fox is apparently trying to up the quality of golf coverage with more than 50 HDR cameras on the Pebble Beach course, new shot-tracing technology and an aerial drone. You can get the Fox Sports Go app on your mobile or tablet if you're going to be out and about while the golf is being played.

If you're outside the US this week but want to access one of the above options, then you can use a US VPN to effectively transport your computer, phone or tablet's IP back to a stateside location.

How to watch the US Open live: UK stream

If you're a UK-based golf fan, you'll be well used to this by now. Sky Sports has all the US Open coverage on your side of the Atlantic. Head straight to the Sky Sports Golf channel from 3pm BST to watch featured groups, with full coverage commencing at 8pm.

Out of the UK this week? Then follow our instructions above to get a VPN and watch as if you were back in Blighty.

Live stream the 2019 US Open golf action in Canada

Cable channel TSN has the rights to show the US Open north of the border in Canada, with coverage starting as early as 11am on Thursday and Friday (ET). Like most other broadcasters these days, there's a TSN app for watching on your mobile or tablet as well.

How to get a US Open live stream in Australia

Fox Sports has bagged the US open live stream coverage Down Under. The first players tee off at 11.45pm however, so it will be on over the course of the night.