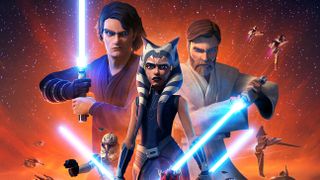 The final season of Star Wars animated series The Clone Wars comes to Disney Plus starting on February 21, it was revealed today. These final 12 episodes will complete the story of the cult favorite series, which was canceled back in 2013, but has been brought back partly because of fans' ongoing support for the show.

A new trailer has been revealed for season 7, too, and it's still a beautiful-looking series. You'll spot regular villain Darth Maul, and get a tease of a lightsaber duel to come between him and Jedi Ahsoka Tano, one of the show's most popular characters.

All six preceding series of The Clone Wars can be streamed now on Disney Plus. This final sequence of episodes should connect the show's story to where things pick up in Revenge of the Sith. The Clone Wars has now been referenced multiple times in live-action: a still-living Darth Maul appeared in Solo, while Ahsoka Tano was among the Jedi voices heard by Rey at the end of The Rise of Skywalker. A key element of Clone Wars lore is also set to play a part in The Mandalorian season 2.

Expect episodes to roll out on a weekly basis – this is how Disney Plus has released all of its original TV content so far.

Even though there's no movie this year, there's still a lot of Star Wars coming in 2020. If you were just hurting over the end of The Mandalorian, the second season will be here before the end of the year. We should also hear more about the other Disney Plus Star Wars shows in the works over the next few months, like the Obi-Wan spin-off, and the show that focuses on Cassian Andor from Rogue One.

In the meantime, The Clone Wars is well worth watching, and it's not just for kids. It helped keep Star Wars going in the quieter decade between Revenge of the Sith and the current Disney era, and was praised for bringing complexity to hard-to-like prequel trilogy characters like Anakin Skywalker.