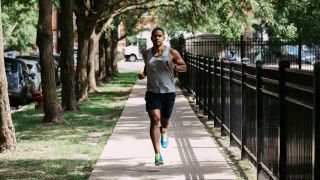 One of the things I’m most proud of in my entire life is how little I panic before a race these days.

I used to be a complete mess, changing my routines, buying new trainers the day before, eating random green pasta in a bid to bulk up my glycogen stores. And don’t get me started on the amount of technology issues I’d run into at 5AM on a race day because I completely changed how I’m going to use it.

OK, even as I’m writing this, I know that I’m lying a bit. Just reading back my report from last year yielded two failures on the tech front: I was up first thing in the morning syncing another marathon to run against, and I had no music on my watch.

This year, I know the whole routine from top to bottom: this is the tech I’m going to be using to get me through the race (and some alternatives for those who want something different).

As you’ll see later in the week in a future diary, the GPS watch is the tech choice of every runner out there - ‘Which watch should I get?’ is the most regular question I get from anyone getting into running.

The great news is there are so many watches out there to try as a runner, and at a range of price points too - and the main thing is you don't need to carry a phone to use them.

I’m going for the Garmin Forerunner 935 though, as it’s an absolute beast when it comes to battery life and the heart rate monitor on the underside is actually accurate enough that I don’t need a chest strap.

It'll also instantly upload my run to Strava when it gets back in range with my phone, so I can start getting those all-important kudos.

But on my other wrist I’m going to be using the Apple Watch 3, with my playlist streaming the whole way though. ‘Gareth, why are you streaming music on the go? Isn’t that gonna kill the battery?’

Yes, yes it is. But here at TechRadar we like to test things hard, and what better way to see how long the battery on the new Apple watch really lasts than putting it into the fiery furnace of the London Marathon?

(If, come mile 18, I no longer have music, the above statement will not be of comfort to me).

If you’re thinking of using your Apple Watch for a marathon, remember that the smaller 38mm version won’t last as long and you might need to have a spare Garmin or Polar device kicking around for the actual race.

If you’re looking for something cheaper, I’d thoroughly recommend the Garmin Forerunner 235 or the Polar M430. The latter, especially, is an underrated training watch / fitness tracker and should definitely be considered as a good budget option.

Again, this is an easy one for me: the Aftershokz Trekz Air. Still the naming irritates me (no brand should have that many Z’s in, unless it’s a mattress company. Or ZZ Top) but as a product they’re brilliant.

The reason is simple: last year’s Trekz Titanium were great companions for the race, letting me hear my music in the quiet moments but letting the roar of the crowd in when needed.

For the uninitiated, the Trekz range uses bone-conduction technology to send audio into your ears, vibrating the sound into your skull while leaving your ear holes completely open.

This means you can hear cheering, adulation, marshall instructions and a grumpy older gentleman shouting at you because you’re ‘on his line’ - all of which happened last year.

The new Air range fix all the issues I had with the Titanium from last year - lighter and the  buttons are easier to press, meaning they’ll be even more comfortable. My only worry is battery life, as I don’t use them in training on long runs, so fingers crossed they hold on…

I’m also a fan of the Jabra Elite Sports headphones, but these are pretty pricey. However, the new versions have more charge cycles from the carry case and come in a natty green color, alongside being snug wireless earbuds, packing heart rate monitors and accelerometers to measure your circuit workouts too.

And for more of a budget option, the Plantronic BackBeat Fit headphones are something I’ve bought for nearly all my running-enamored family members - they’ve got a connecting wire but stay in place remarkably well.

If you’re looking to find out which chest strap I’m wearing, well… I no longer wear one. This is a bit of an issue because I lose one vital piece of information from the Garmin, which is my lactate threshold: ie, the point at which I begin to fatigue.

I know it roughly, and I’ll be using that in the race to make sure I stay strong, but it’s annoying that can’t be done through the optical sensor.

I’d always advise going for the Garmin official chest strap if you’re going to buy a watch, simply because it’ll offer the best metrics if your device can show you the more advanced dynamics, but otherwise the Wahoo Tickr X remains a good, cheaper choice.

Even the basic Tickr will do well for you - it just doesn’t have the auto-tracking feature that I like. (Banging your chest to change tracks is also cool-yet-pointless too.)

I just got back from Rome, where I was out working for the weekend on another feature. Stuck on the south side of the city, I decided to look to see if there was a Parkrun nearby.

Turns out there was one in Rome - one of only 10 in Italy, and only the second week it had been open... but it was utterly miles away. I really couldn't be bothered and had work to do.

However, one quick WhatsApp conversation with my running buddies later, and I was in a rather expensive cab on my way to the startline.

You can see how the entire experience unfolded on Twitter here...:

I’ve had a stupid, dramatic, brilliant morning in Rome today because @parkrun is awesome. This thread was so much fun. https://t.co/hT5YWEUOV0April 14, 2018

I wanted to mention it here because a) I wouldn't have found this wonderful experience without a little bit of tech, namely me Googling for info, Google Mapping to find out where it was, then chatting with pals to be forced to do it.

It was so worth it. The race only had a few marshalls, the course wasn't marked, it was undulating and down tracks which didn't really have a path to run on.

It was GLORIOUS and worth every penny. I came second, thinking I could have taken first at the start of the second lap but rolled my ankle and cost myself a few seconds making sure it was OK.

(The guy in front was definitely taking it easy though, so it was probably never on the cards).

It's just these experiences that make life worth living as a runner - having a race briefing with the Vatican in the background can't be beaten.

The only thing that does worry me is my mental state - this time last year I came first in a Parkrun through sheer grit and determination. That same mental fortitude wasn't there out in Rome - I tried but I knew there was a gear I wasn't accessing.

Hopefully that won't matter come the weekend - last year's marathon was an exercise in torture anyway - but if it does, I'm a little screwed...