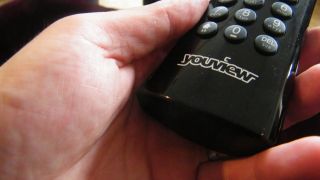 Can you view bring connected TV to the masses?

It's not called Project Canvas any more, though: after a brief spell as a kangaroo, Project Canvas is back in the form of YouView - and this time it's honestly, definitely, absolutely a thing, a real thing, with a launch date and prices and stuff. YouView launched this week, and you'll be able to get it in the latter half of this month.

So what on earth is it? It's IPTV, telly over the internet, and it's best described as Freeview with goodies that come via your broadband connection. The BBC's been the project lead, and partners include ITV, Channel 4, Five, BT, TalkTalk and networking firm Arquiva. Sky and Virgin Media aren't currently part of the YouView party.

You will, of course, need new kit, as Patrick Goss explains: "You'll need a YouView box and a broadband connection, along with a digital television signal." The digital signal gives you live TV, and the internet connection - which for now must be wired, not wireless - delivers on-demand and catch-up services. HD will be available if your connection's fast enough.

YouView may be internet-based, but it won't put Google on your goggle box. "What IPTV and YouView does is use the connection of the internet - your broadband - to stream programmes, use apps and offer other services," Goss explains, pointing out that "there has been no mention of a browser" for YouView users. "Think of it in terms of applications on your mobile phone, they use the mobile connection, but they are not necessarily offering the world wide web."

"This is a great moment in British television," says Lord Alan Sugar. Is it, Lord Sugar? Is it really? Let's ask Marc Chacksfield, who's quick to identify a few issues with the £299 hardware. "If you are an early adopter then what you get is a standalone box with no ISP ties – which means no-frills when it comes to the extras, unless you already have a BT or TalkTalk connection," he says.

"If you have this, then it has been confirmed you will get the extras. Plug in any other ISP and you get a no-frills version of YouView."

Get comfortable through the ads

The interface is good, the EPG is excellent and unlike some services - *cough*Virgin Media*cough* - the remote hasn't been designed by complete bloody idiots. However, YouView doesn't support adaptive bitrates for streaming so "the HD isn't optimised for those who are blessed with speedy connections." That's a problem if the likes of Lovefilm and Netflix come on board, because they pride themselves on "pushing the best stream out for whatever connection is available."

Worst of all, you have to sit through the ads. On 4oD, "we had to watch a two-minute advert in full before we could view our content on demand. The ability to fast-forward was frozen while the advert was on... and we had to sit through the same thing again half-way through the programme."

There's another problem, which is that as much as we miss Girls Aloud, it isn't 2009 any more. TV over the internet isn't going to make anybody go "OMG!" any more, because we can already get TV on everything from Apple TVs and Xboxes to Android devices. Just ask Sky, whose Sky Go for Android has just added on-demand streaming.

For now mobile telly is best suited to Wi-Fi rather than mobile broadband, but we're hearing that 4G might finally turn up on O2 this time next year. That's good news for mobile users but bad news for Freeview ones: it seems that 4G masts will adversely affect reception for a handful of Freeview users - and by "a handful", we mean "nine hundred thousand". Inevitably, some of those users will be YouView ones.