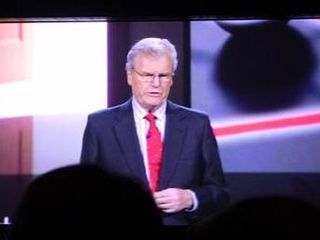 Sony's keynote was typical CES high-level glitz, with guest appearances from Tom Hanks and Walt Disney/Pixar's John Lasseter. The only real tech of interest was a titchy bendable OLED screen and 3D clips from Pixar.

Rough-edged prototype kit was shown including weird video sunglasses and an alarm clock that could present you with key info from the web, like the weather.

There was also a glimpse of the Wi-Fi CyberShot camera that can upload to the web or show pictures on a Bravia TV wirelessly.

Hanks was there to promote the follow up to the Da Vinci Code movie kicked it all off and he was in mischievous mood. "I'm here because of my Betamax regret. What a world this would have been if I'd been one of the 600 people who bought Betamax?"

He also ripped into the pre-scripted talk - "they write the lies but I tell the truth" and pretended to almost say Kimble instead of Sony Reader (perhaps you had to be there for that one). "Sony is there even when I fire up my computer" he quipped, before pausing. We guess he's got a MacBook. Hanks finally decided to depart, but not before he took the liberty of mentioning basically every Sony competitor. "I feel the evil forces of Samsung pulling me, Howard!"

"I took a risk. I failed. But we'll still be friends," joked Stringer. "This is the third time I've done this, it may be the last. Generally speaking a plus I think."

Stringer spoke of the economic environment, but didn't dwell on it, preferring instead to laud Sony's efforts in HD and praising Blu-ray. He then spoke about the need to make content central to our experiences. "We're at a critical inflection point in our networked age. By 2011, 90 per cent of product categories will connect to the internet and each other." Among other observations, Stringer added it was important to support open technologies. Pinch us, this is Sony, right?

John Lasseter was there to demonstrate a dynamic, internet connected Blu-ray menu that changed weather depending on your location. There was also a demonstration of the Car Finder game from the Cars movie disc. "The future of this technology is pretty amazing." Lasseter also mentioned that 3D Toy Story will be with us this year, and a Cars-esque 3D short film.

Like Microsoft with Xbox, PlayStation 3 is crucial to Sony's vision of a fused content/hardware experience. 61.3 million PS3s have been sold, with more than 330 million content downloads over the PlayStation Network. Movie streaming for the UK wasn't forthcoming.

And then it was over, bar a guest appearance from Usher. "If you can imagine it, we can help you make it real," was Stringer's finishing statement. Not too much tech then, but overall a plus, we think.