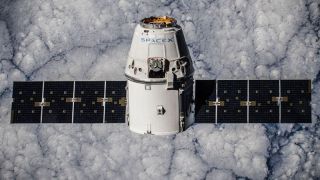 The comparisons between Elon Musk and Tony Stark get stronger every day. Not content with ushering in a new era of self-driving cars, blanketing the Earth with solar panels and establishing a human colony on Mars, the South African entrepreneur is now well on the way to providing high-speed internet coverage to the entire world.

How? By launching 4,425 satellites into orbit – a scheme that he's just filed documents for with the US Federal Communications Commission. For reference, the total number of satellites currently in orbit is 4,256, and only 1,419 of those are operational.

The scheme, which was first announced in January 2015 and trailed beforehand, was previously estimated by Musk to cost $10 billion, though a Reddit comment estimates it would reach profitability within about a year.

According to the filings, it would begin with the launch of 800 satellites to cover the United States, including Puerto Rico and the US Virgin Islands.

Each spacecraft would be about the size of a car and weigh 386kg, sitting in orbits ranging from 1,150-1,325 km above the surface of the Earth. No date for the launches has yet been given, but it would require 150 rockets at the very least to get all the satellites into place.

Before these launches can begin, SpaceX will need to resolve the problems that led to a rocket exploding on the launch pad on 1 September, destroying a $62 million Falcon 9 booster and $200 million Israeli communications satellite in the process.

"The system is designed to provide a wide range of broadband and communications services for residential, commercial, institutional, government and professional users worldwide," SpaceX said in technical documents accompanying its filing.

However, it will have competition in that goal - from OneWeb, Boeing and Google's Project Loon.