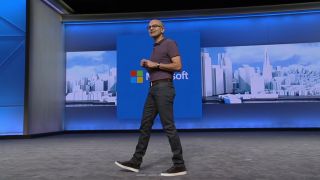 As part of the big Anniversary (formally known as Redstone) Update for Windows 10, Microsoft has branded a new Windows 10 feature called Ink, putting further emphasis into pen and stylus usage.

The new feature levels up the interaction of any hand writing users put to the screen. For example, users can make a reminder to call their mom tomorrow, and Windows 10 will intelligently recognize you've written a date and transform it into object you can tap and setup a reminder through Cortana.

Microsoft wants ink to be as intuitive and natural as using real paper. As such Ink is also being given its own work space built into the lock screen, so you don't have to unlock the device to start sketching and taking notes.

Coratana also becomes more conversational though the Anniversary Update to the point of imitating the 1960s Batman theme. Beyond fun and games, Cortana is also more helpful with managing your work schedule by automatically adding your flight itinerary or automatically sending over a Powerpoint document to your coworker before a big meeting.

When setting up a lunch appointment, the Windows 10 digital assistant will also intelligently offering choices for booking a tablet, take out options and other things to do.

Of course the Anniversary Update isn't just limited to the Windows 10 operating system. Xbox One will be getting Windows 10 apps and a developer mode as part of Redstone.

Microsoft also announced the enhancements will also come the Hololens, but the software company didn't highlight what these would include.

While on stage, Executive VP of the Windows and Devices Group Terry Myerson boasted are now more than 270 million Windows 10 devices worldwide. According to Microsoft, and the platform is being adopted 145% faster than Windows 7 and 4 times faster Windows 8.

The Anniversary Update should come to all Windows 10 users in late summer.