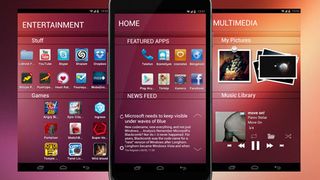 Don't confuse Ubuntu for Android with Ubuntu Touch, which is still in development

Ubuntu for Android was an ambitious project, but now it's all but over, Canonical has confirmed.

Following reports that Ubuntu for Android isn't "in active development" anymore, the Ubuntu maker sent a statement to Android Authority confirming as much.

This rumor initiated when Canonical designer Matthew Paul Thomas posted a bug report, since taken down, on launchpad. According to OMG Ubuntu, it read:

From the maker's mouth

Canonical's statement says the company still believes that Ubuntu for Android was "a great product concept and that consumers would welcome the feature," but "to take the development further requires a launch partner in order to make the necessary modifications on the Android side."

"We are currently not in concrete discussions with launch partners, but we are still very much open to such a partnership," the statement continues. "We are focused on Ubuntu for Phones at the moment, therefore we are not actively pushing for Ubuntu for Android.

"However, if a prospective partner steps forward, we are very much open to launching Ubuntu for Android."

Introduced in 2012, Ubuntu for Android sought to make high-end Android handsets into hybrid devices that would transform into full-fledged Ubuntu desktop computers when plugged into a monitor.

It worked in part because Ubuntu and Android are both Linux-based operating systems, but it never caught on, apparently in part thanks to a lack of interested parties on the Android side of things.

With Canonical focusing on Ubuntu for Phones, it may be a very long time before we see another hybrid Android/Ubuntu effort - if ever.