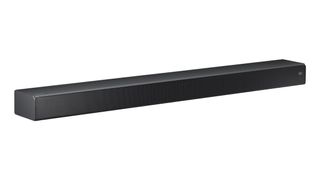 Joining its existing 2017 lineup of soundbars, Samsung has just announced the MS750 Sound+ Soundbar, which it's calling its flagship soundbar for 2017.

Samsung claims this speaker configuration is capable of vertically expanding the sound stage, although there's no mention of Dolby Atmos, the 3D surround sound technology that creates the impression of sound that's above, as well as behind, you.

An expandable soundbar with pedigree

By default the MS750 is a 5-channel soundbar, but you have the option of expanding your setup to a 5.1 setup by pairing it with a W700 subwoofer.

We've already given five stars to one Samsung soundbar this year, the HW-MS650 - which is the 3-channel version of this soundbar. In our review we said that it achieves a quality of sound that "you've no right to hear from a one-body audio product."

The MS750 will be available later this year for $699, while the W700 subwoofer will be available for $499. Samsung has yet to announced pricing for the UK and Australia, but we'll update this post when that information becomes available.

So, it worth waiting for? We'll have to wait for our full review to see if the MS750 is able to combine this same level of performance with a 5-channel setup.