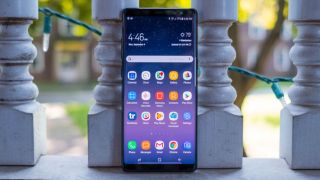 We're learning more and more about Samsung's Galaxy Note 9 phablet that's expected to launch later in the year, and the latest rumor suggests the phone may come with an extraordinary amount of storage.

Brochures in Korea confirmed there will be both 64GB and 256GB versions of the phone, much like the Samsung Galaxy Note 8, but it shows a 512GB version as well.

This isn't the first time we've heard of a 512GB Galaxy Note 9 - an industry insider speaking to Android Headlines said something similar last month - so this adds further evidence to that claim.

Do you really need it?

The bad news is that most of the world won't be able to buy the 512GB version of the Galaxy Note 9.

This new rumor suggests the largest storage variant of the phone will only be on sale in South Korea and China, with the rest of the world given the option of 64GB or 256GB.

Previous Samsung Galaxy Note devices have featured microSD slots so you can expand the storage of your device, and we'd expect it to return here. That may mean you'll be able to combine your 256GB of internal storage with 256GB of microSD space on the Galaxy Note 9.

We likely won't know for sure until August when we expect to Samsung to host an Unpacked event for the phone's launch. It's also rumored we'll see the new Samsung Gear S4 smartwatch at that launch too.

Other specs rumored for the phone include a 6.3-inch QHD+ resolution display with either an Exynos 9810 or Qualcomm Snapdragon 845 chipset inside.