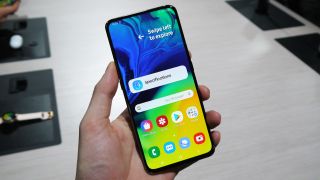 There have been whispers of a Samsung Galaxy A90 smartphone for months now, but we finally have a first idea of what the phone might offer. Or rather, what the phones might offer, as there’s seemingly two of them.

Reputable leaker @OnLeaks has shared specs for both models. They apparently have a 6.7-inch screen, an in-screen fingerprint scanner, a Snapdragon 855 chipset, and a triple-lens rear camera with a 48MP main lens and a 5MP secondary lens.

That’s not all though. The 5G model is said to have an 8MP rear lens in addition to the two listed above, while the 4G model has a 12MP third lens, so the 4G phone seems like it's got a sligtly better camera.

The 4G version of the Galaxy A90 is also listed as having “exclusive Tilt OIS tech”. It’s not clear exactly what that is, but OIS stands for optical image stabilization – a technology which helps counteract camera shake to avoid blurry images.

If these specs are right, then it sounds like the 4G model might be a slightly better phone in some ways, albeit with slower mobile data speeds. The presence of a Snapdragon 855 chipset on both models marks them out as high-end though, as that’s the same chipset as you’ll find in many of 2019’s flagships, including US versions of the Samsung Galaxy S10.

That’s surprising, since Samsung's A range is typically mid-range usually. We’d still expect the Galaxy A90 to undercut Samsung’s real flagships, but it might not do so by much.

Of course, that assumes these specs are accurate. Another recent leak pointed to a 32MP main camera rather than a 48MP one, which casts doubt on these newer specs, and right now we’ve no way of knowing what’s right. The Samsung Galaxy A90 could be announced soon though, so we should know the truth before long.