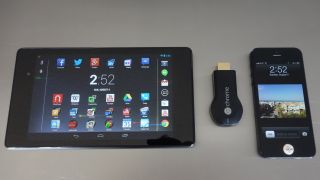 Soon the Chromecast will have more apps than it can handle

Google announced on its Android Developer Google+ page that it revamped the Google Play services to version 4.2. With the update comes the Chromecast API necessary to cast content from apps on Android devices to the TV along with some freshly pushed Google Drive APIs.

Regular app shoppers won't have to do a thing, as developers will already have slotted the update into mobile applications, which can be simply downloaded or updated with the new functionality

Opening up the gates

Earlier this month, the search company released the Google Cast SDK to developers for building apps with Chromecast support.

However, it seems Google asked developers to hold off on releasing their new and improved Chromecasting apps. Without the now updated Google Play Services 4.2, programmers could not compile their Chromecast supported apps for submission to the Google Play Store.

Now that all the pieces have fallen into place, we all should start seeing a lot of new Chromecast compatible apps. Currently Chromecast has a dozen-plus, including Vevo, HBO Go and Pandora. Beats Music is on the way, too.

It's a short list for now, but we expect it to grow exponentially now that Google has turned its walled garden into an open lawn.