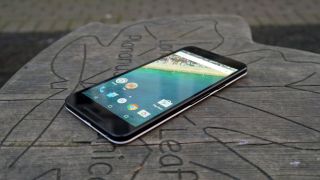 There still aren't many images of the new Nexus handsets, but a batch of leaked renders have just given us a much clearer look at one of them, showing the Nexus Sailfish off at a variety of angles.

The Sailfish, which is expected to be smaller and cheaper than the Nexus Marlin, looks fairly plain from the front, with large black bezels above and below the screen, but it's slightly more interesting from the back, with a black panel at the top, housing the camera and fingerprint scanner, while the bottom half comes in a metallic silver, black or gold.

Other details from the images include a 3.5mm headphone jack on the top edge, while speakers and a USB Type-C port are found on the bottom edge.

The overall design is a lot like we've seen in an earlier render, but there are some differences on-screen. These new renders show a 'G' tab on the top left, in place of the Google search widget seen in the older render. But that older render has solid white navigation buttons, while the new one just has outlines, as you'll find on current phones.

Those differences don't necessarily mean that either leak is fake though, as they could just be based on different versions of Android Nougat.

On the whole this latest leak, which was spotted on Weibo by Android Pure, lines up with what we've seen and heard previously, so it could well be accurate, but we'd still take it with a pinch of salt.

All will be confirmed soon, as the Nexus Sailfish and Nexus Marlin are both likely to launch in early October.