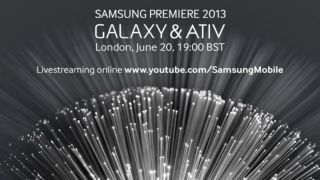 Samsung announced the mini version of its flagship smartphone, but there was nothing small about the number of products it unveiled today in London.

The Korean manufacturer finally told the world what it already knew: the Samsung Galaxy S4 Mini is on its way.

While there is 8GB of internal storage, the company noted that only 5GB are actually available to use.

The Samsung Galaxy S4 Mini release date is pegged for "before the end of June" in the U.K., while availability in other markets is still unknown.

Samsung also announced the Samsung Galaxy S4 Zoom, which is more like a digital camera-fied version of the stripped-down Galaxy S4 Mini.

It has a 16-megapixel camera on the back along with a 10X zoom lens, hence the name. That's great for Android phone fans who are more interested in a camera than high-end smartphone specs.

Phone aficionados will want to turn their heads toward the higher-end Samsung Galaxy S4, which will now come in five new colors.

Sure, the Blue Arctic, Purple Mirage, Red Aurora, Brown Autumn and Pink Twilight are a bit garish and don't have a release date yet, but where else are you going to get both pastel variety and Smart Pause.

The other big focus of Samsung's June 20 announcement was its Ativ tablet range.

The company was bending over backwards to show off its slim, transforming Samsung Ativ Q tablet-laptop hybrid that definitely fits into the post-PC era.

It packs both Windows 8 and Android Jelly Bean on the same device with a 13.3-inch touchscreen display and could rival the Dell XPS 11 and Lenovo IdeaPad Yoga when it launches later this year.

Can't wait until that vague release date? In August, Samsung will launch its Ativ Tab 3, which the company claims to be the world's thinnest Windows 8 tablet.

This wafer-thin tablet measures just 8.2mm and weighs in at only 550g. Yet it's powered by an Intel Atom Z2760 CPU chip and runs full Windows 8, not Windows RT.

The Ativ Tab 3 will also come with Microsoft Office Home and Student edition, which will be perfect for anyone returning to school the next month.

The Samsung Book 9 Plus, Book 9 Lite and One 5 Style all take on the more traditional PC role.

The skinny on these Windows 8-running computers is that the Book 9 Plus is a 13.3-inch laptop with a touchscreen and 12 hour battery life aimed at business professionals.

As you may have guessed, the Book 9 Lite is a lower-specced version of the Plus.

The Samsung Ativ One 5 Style is a minimalist is look too, but this all-in-one desktop is anything but in terms of its specs.

This makes it the first compact system camera (CSC) with 4G and Android, specifically Android 4.2.2 Jelly Bean in this case.

In addition to its 20.3 million-pixel APS-C sized sensor and interchangeable lenses, the Galaxy NX's connectivity feature specs include WiFi and GPS to boot.

Like most of the products unveiled today, Samsung didn't reveal a price for its Android-powered CSC, but it did promise a summertime launch.