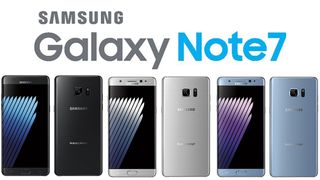 We're one month out from the rumored Samsung Galaxy Note 7 release date, and today we're seeing the colors this Android phone will come in, according to a new leak.

There are going to be three hues of this Edge-based phablet, tweeted serial phone leaker Evan Blass. They are Black Onyx, Silver Titanium and the standout new color Blue Coral.

The Samsung Galaxy Note 7 colors are rather tame, and that's to be expected. This is, afterall, a business-focused Android phablet. It's all about that 5.7-inch large screen and S-Pen stylus.

More colors could be announced next month, but we didn't see more than three colors in the US for the Samsung Galaxy Note 5. It was limited to Black Sapphire, White Pearl and Gold Platinum.

You'll be able to buy the Note 7 black, but white and gold are absent from today's leak. Making up for it, Silver Titanium, which was a fourth, international-only Note 5 color that never made it to the US, does finally show up for 2016.

Today's leaks doesn't change up the Samsung Galaxy Note 7 release date or specs. It's still expected to launch on Tuesday, August 2 in New York, as several past rumors have indicated.

It's said to have a 5.7-inch Quad HD Super AMOLED display and, almost be the bigger brother to the 5.5-inch Samsung Galaxy S7 Edge due its its curved right and left sides.

New is a Galaxy Note 7 iris scanner that's supposed to act as an additional way to unlock the phone, and old is the 12MP rear and 8MP front camera setup that we wouldn't change.

The Note 7 marks the return of microSD card slot and IP68 water-resistance, absent from the Note 5, and tops out at 6GB of RAM and 64GB of internal storage.

I don't expect it to run Android Nougat (it'll just miss Google's "end of summer" launch) or have a battery that's removable, but it'll run Android Marshmallow and could max out at a 4,200mAh battery capacity.

We've got a flight booked for New York in anticipation of the August 2 Samsung Galaxy Note 7 launch, so we'll be reporting on the phone, whether or not it actually shows up in black, silver and coral blue.